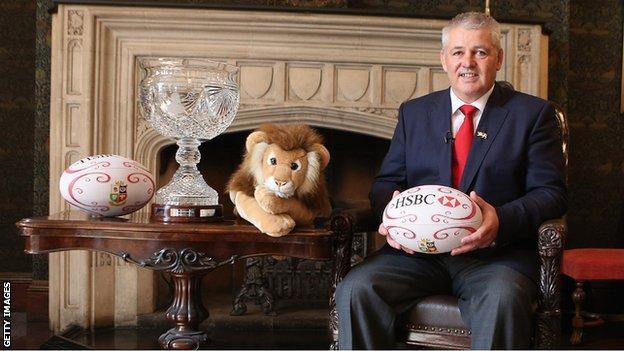 Warren Gatland has been confirmed as the head coach of the British and Irish Lions for the 2013 tour of Australia.

The Wales boss has long been favourite for the job, but his planned appointment in April was postponed after he broke both heels in a fall.

Gatland, 48, is the second New Zealander to coach the Lions, after Graham Henry led the party in 2001.

"I am really honoured to have been asked to take the position of head coach," Gatland said.

"There is no question it will be one hell of a challenge; playing in the southern hemisphere is one of rugby's hardest challenges.

"As there was only really one name in the hat for the last 12 months, it comes as no surprise that Warren Gatland has been appointed head coach. He has recovered from serious injuries to both heels sustained in a bad fall from the roof of his house in early summer but he was always the obvious candidate. He has an excellent track record with Wales, especially in the last 12 months, and he was a key part of the Lions coaching team in South Africa in 2009."

"The Lions came close in South Africa [in 2009] and our ambition is to win the series in 2013. I believe we have the players to do that."

The Lions will play three Tests against the Wallabies and seven tour matches, including a warm-up against the Barbarians in Hong Kong.

England fowards coach Graham Rowntree and Wales defence coach Shaun Edwards are set to be part of Gatland's back-room staff but those appointments are not expected to be announced until October.

All three were part of head coach Ian McGeechan's team on the 2009 tour of South Africa, where the Lions lost an enthralling Test series 2-1.

"I really enjoyed the experience as one of the assistant coaches in 2009 and since then have harboured the ambition to lead the tour to Australia next year," Gatland added.

"Over the coming months I will give careful consideration to the make-up of my coaching staff and of course the playing squad itself.

"A Lions tour is unique, it is the ultimate career pinnacle for coaches and players. I want to ensure that we get the tour environment right so that we are hugely competitive and that our fans are proud of the team."

Gatland will begin his Lions duties immediately and will not be in charge of Wales when they defend their Six Nations title next year.

But he has reached an agreement that will allow him to coach Wales in their final two autumn internationals against New Zealand on 24 November and Australia on 1 December.

Rob Howley will begin his role as Wales caretaker coach for the first two games of the series against Argentina on 10 November and Samoa on 16 November, and for the Six Nations campaign that follows.

But the former Wales and Lions scrum-half could also become part of Gatland's staff in Australia as backs coach, which would see Neil Jenkins and Robin McBryde taking the Wales reins for the summer tour to Japan.

Having led Wales to the semi-finals of the 2011 Rugby World Cup and last season's Grand Slam triumph, Gatland was the stand-out candidate to coach the Lions in Australia.

Back in March, the Welsh Rugby Union gave him its blessing to be released from his Wales contract should the Lions come calling.

His appointment was expected to be finalised within a month, but the process was derailed after Gatland suffered a double heel fracture in a fall while cleaning windows in New Zealand.

The injury forced him to hand over the reins to assistant Howley to take charge of Wales' three-Test tour to Australia, although Gatland was able to join the squad to observe the final two games.

He saw the Wallabies secure a 3-0 whitewash in a hard-fought and compelling series, with only 11 points separating both sides over the three Tests.

Gatland's task is to secure a first series win for the Lions since McGeechan's squad won 2-1 against South Africa in 1997.

Scotsman McGeechan was also the last coach to succeed with the Lions in Australia, winning the final Test to secure a 2-1 victory in 1989.

The Lions, chosen from the best players from England, Ireland, Wales and Scotland, lost 2-1 on their last visit to Australia under Henry, who was also a serving Wales coach at the time.

Lions tour manager Andy Irvine admitted Gatland had been the man they wanted: "It has been no secret that after the initial selection process, Warren was our preferred candidate.

"We naturally had to ensure he was fit to take up the post. Those concerns have now been addressed.

"Warren has an outstanding coaching record and he has been fully embedded in rugby in the UK and Ireland since 1989."

Gatland coached Ireland for three years between 1998 and 2001 before taking charge at Wasps, where he won a hat-trick of Premiership titles and the Heineken Cup.

In 2006, he moved back to New Zealand and coached his native Waikato to the New Zealand provincial title before Wales came calling.

Gatland took charge of a Wales side that had just crashed out of the pool stages of the World Cup and he made an immediate impact, guiding them to the first of two Grand Slam titles during his tenure.

The second was this year and it followed hot on the heels of Wales' greatest World Cup performance since 1987, when they came agonisingly close to beating France to earn a place in the final.