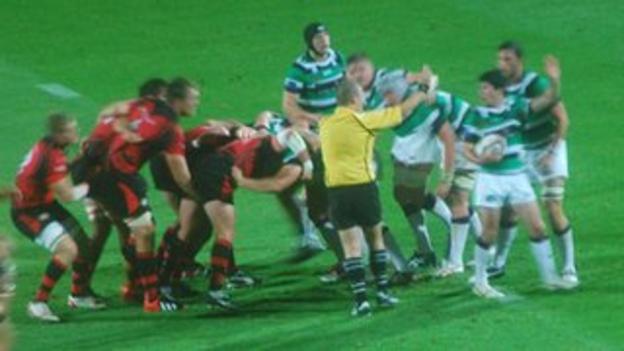 Josh Griffin set the home side on their way with a try just five minutes into his debut.

But Michael Le Bourgeois then grabbed Jersey's first ever Championship try after a superb run from Guy Thompson.

It was 13-13 at the break, but two touchdowns from Leeds skipper Jacob Rowan and one from Jamel Chisholm gave them the bonus-point win.

It leaves the islanders without a point from their opening two matches, but they could have been in front at half-time had Ross Broadfoot's penalty gone between the posts instead of hitting the upright.

Leeds fly-half Joe Ford had also hit the woodwork with a kick of his own.

Jersey's Nicky Griffiths was sin-binned early in the second half and the hosts took advantage of the extra man when Rowan scored his first after a series of drives for the try line.

Two Le Bourgeois penalties either side of Chisholm's well-taken try in the corner gave the island side hope, but Rowan's second sealed the win for his team in front of 2,066 fans.

"I thought in the first half we defended far too narrowly," said Jersey director of rugby Ben Harvey.

"At the moment we're making far too many errors at this level of rugby.

"We're not in a rubbish league, several thousand people come to watch the game, and you're playing against a good side.

"Eradicate mistakes and we will be a very good side and we've got to do that quickly."