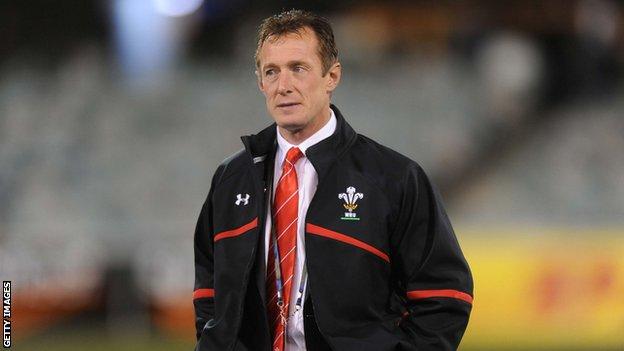 Rob Howley will continue in his role as Wales caretaker coach after Warren Gatland was confirmed as the 2013 British and Irish Lions head coach.

The former Wales captain will take full responsibility for the senior national team with immediate effect.

"It is an honour and a privilege to have been asked to continue as head coach of Wales in my caretaker role for this extended period," said Howley.

Howley will next lead Wales against Argentina in Cardiff on 10 November.

The former Wales and Lions scrum-half will then prepare his squad for the Samoa game on 16 November, before Gatland returns to take charge of the final two autumn internationals against New Zealand and Australia.

But Howley will coach Wales for the 2013 Six Nations campaign as the defending champions seek to add to last season's Grand Slam, the second won under Gatland. Wales will also tour Japan in the summer.

Howley took charge of Wales' recent tour of Australia, while Gatland was sidelined after a freak accident which saw him break both of his heels in a fall.

Wales suffered a 3-0 Test series defeat to the Wallabies but, in a hard-fought and compelling series, only 11 points separated both sides over the three Tests.

"I am also delighted for Warren who thoroughly deserves to have been selected to coach the British and Irish Lions on their 2013 tour," said Howley.

"I thoroughly enjoyed my experience of heading up the coaching team over the summer and now I am looking forward to building on that during the months ahead.

"Work is already well advanced in preparation for the autumn and I know we have some great games to look forward to against some of the toughest opposition in the world game.

"I want to thank the Welsh Rugby Union for offering me this opportunity and I look forward to the challenges that lie ahead."

Gatland has been seconded from 1 September 2012 to focus on the Lions role until the conclusion of the tour, although he will have his temporary return as Wales boss in November.

The WRU has also revealed it will consider any further requests for secondments of other coaching and backroom staff in the Lions squad, which are likely to be made as the season progresses.

Gatland played a key role for the British and Irish Lions in 2009, when he and six other coaches and backroom staff were released by the WRU on secondment for the tour of South Africa under Sir Ian McGeechan.

"We have a proud history of helping the Lions through the secondment of key staff and this will continue to be our stance whenever possible," said WRU group chief executive Roger Lewis.

So Howley, a former Wales and Lions scrum-half, could also become part of Gatland's staff in Australia as backs coach, while Shaun Edwards, Wales' defence coach and Graham Rowntree, the England forwards coach, are favourites to be part of the the Lions backroom team.