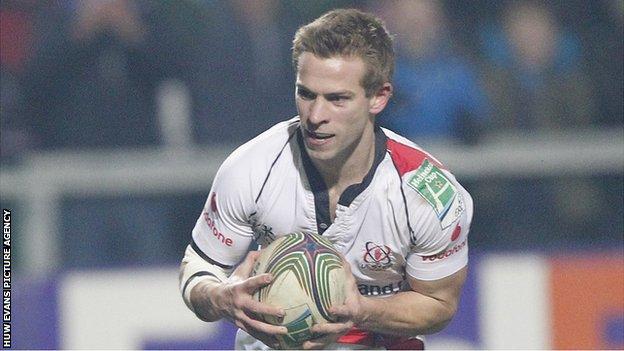 John Afoa was stopped just short of the line but replacement scrum-half Marshall was alert to dive over.

Paddy Jackson added the conversion to the two penalties he struck after taking over fly-half duties from Niall O'Connor who struggled with the boot.

The result saw Ulster add to their opening weekend 18-10 win over Glasgow at Ravenhill, while Ospreys have just two losing bonus points in the Pro12 table after their 12-6 defeat at Treviso.

There was plenty of intent shown from both sides, but all too often promising attacks were undone by sloppy handling.

It took until 22 minutes for the game to come alive with right wing Dirksen producing a superb individual run to claim the game's first try.

Picking up a loose pass 35 metres out, Dirksen hurtled through a fragile defence, fended off Ulster full-back Jared Payne and then turned on the afterburners to make the line unopposed.

Morgan added the extras, but the Ospreys failed to build on their lead as mistakes continued to plague their game.

Ulster fly-half O'Connor made up for an earlier miss to land a fine long-range penalty after 31 minutes, but failed with an ambitious attempt from inside his own half just before the break as the Ospreys went in at half-time 7-3 to the good.

Two penalties from Morgan after the break extended the home side's advantage as the champions attempted to assert control.

But a clutch of substitutions by Ulster coach Mark Anscombe turned the match on its head.

Another replacement, Jackson, nailed a couple of penalties to make it 13-9 before yet another member of the cavalry, scrum-half Marshall, claimed the match-winning score with six minutes remaining.

A sharp counter-attack from wing Craig Gilroy set up the opportunity which eventually saw Marshall touch down from close range after Afoa had been stopped just shy of the line.

It needed the television match official to confirm the score, but Marshall and his Ulster team-mates were in little doubt.

It left the Ospreys with little time to redeem themselves, but any chance they had of salvaging the win disappeared when they coughed up the ball again.