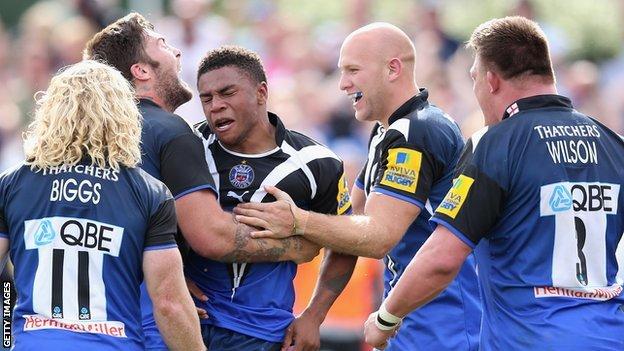 A first ever Premiership try by Kyle Eastmond helped Bath make it two wins out of two this season.

After last weekend's fireworks at Twickenham, Wasps were error strewn in the opening stanzas although they showed ambition to run the ball in the glorious conditions at The Rec.

Bath, adopting a more conservative game, were also guilty of basic errors and Ben Skirving's attempt to take a clearance kick above his head led to Robinson's equalising penalty after he had missed a simple 12th-minute shot at goal.

Earlier Barkley had opened the scoring when Wasps infringed at a line-out on the 22 and Bath made it a seven-point lead through Banahan on 22 minutes.

The giant centre had already punched a hole in midfield to put Bath on the front foot but when the ball found him out wide after eight phases the England man stepped out of two tackles to cruise in, which Barkley converted.

Christian Wade was denied by a brilliant covering tackle from Barkley in the closing phases of the first half and, as Wasps continued to probe, won a penalty in front of the posts after some stern defence from the hosts.

The teams emerged from the changing rooms with Bath holding a 10-6 lead but they went 14 points ahead inside the first five minutes.

Barkley added an extra three from the tee but a terrible mix-up between Robinson and Tom Palmer, on his first start back at Wasps, allowed Biggs to pounce.

In running the ball out of his half, Robinson passed to his unprepared second row and when it went to ground the Bath flyer held off Wade as he hacked the ball over the line.

But the hosts switched off three minutes later when a quick tap-penalty by Joe Simpson saw Marco Wentzel the unlikely provider for Varndell with a chip into the corner.

Robinson's touchline conversion made it a seven-point game and on the hour mark it appeared that Bath were tiring with Wasps in the ascendancy.

But with 13 minutes to play a magnificent mazy run from Eastmond, allied, it should be said, to some suspect Wasps defending, put the hosts 14 points clear after Barkley converted.

A turnover in their own half ended with Wade going clear, after substitute Joe Launchbury put him away, and Robinson converted to make it 27-20 with seven minutes to play.

When Barkley made it 30-20 the winner was in no doubt but Robinson held his nerve from 40 metres to hand the Wasps a deserved point.

"He is a smart player, we knew that when we signed him. His ability has never been in doubt and the try he scored was a contender for try of the season.

"Apart from that he has a lot about his game in terms of passing, kicking and running.

"He is one of the best at the club and we are very pleased with his development."

"We looked dangerous in open play and that was it, we had no patience with the ball and we offloaded when it was not on.

"Whenever the game got loose we looked dangerous but we never looked like constructing anything ourselves and Bath did the basics better than us.

"They had a good scrum and driving line-out and they did what was needed."