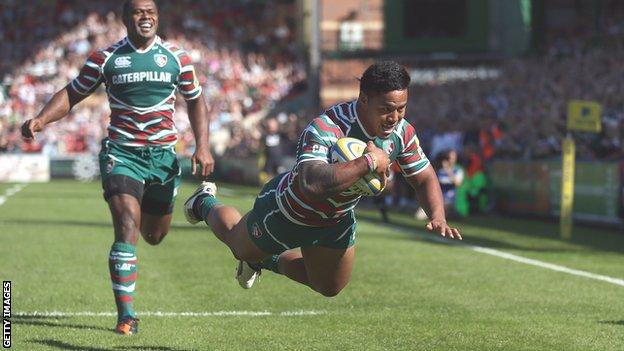 Leicester continued their perfect start to the season with a second bonus-point win at home to Worcester.

Vereniki Goneva struck soon after the break before David Lemi answered with a score for the visitors.

A penalty-try secured the bonus for Tigers before Graham Kitchener extended their lead and despite a late Alex Grove try Worcester left with nothing.

Leicester were leading 14-3 after just 12 minutes following two sensational tries - both rounded off by Tuilagi.

The opener came with less than two minutes on the clock after Worcester were turned over in the opposition's 22 before fly-half Toby Flood launched a counter-attack involving Tom Youngs, Scott Hamilton and Kitchener, who fed Tuilagi the scoring pass.

Flood converted and, after Goode pulled three points back, Goneva, on his debut start at Welford Road, produced a stunning 80-metre break for Tuilagi's second.

Flood again provided the conversion but Worcester fought back and, after Geordan Murphy denied former Tigers stand-off Goode a try, the Warriors stand-off struck another penalty.

The England international booted Leicester 17-6 ahead, and after Goode kicked his third penalty in the 29th minute Worcester lost full-back Chris Pennell to the sin-bin just before half-time for a professional foul.

Goode, who had earlier saved a try for Worcester, was again on hand early in the second half with a great tackle on Murphy but Flood's miss-pass found Goneva who scored.

Worcester, who were again reduced in numbers again when scrum-half Shaun Perry was shown yellow for back-chat, fought back through winger Lemi who rounded off an 80-metre counter-attack - which Goode converted to make it 22-16.

But when referee Andrew Smalling lost patience with Worcester's scrum he went under the posts for a penalty try and with it secured Tigers' bonus point.

George Ford missed the extras but in injury-time Grove scored Worcester's second after touching down a chip over and Goode kicked the conversion.

"It's a perfect start if you look at the table but it was far from perfect performance-wise.

"We did some really good things and we are creating a huge amount of opportunities but we also turned the ball over too much. We just played ourselves into trouble. It's easily fixed but our mindset needs to be better than that.

"Every time we recycled the ball properly there were opportunities for us. But we were sloppy at times and put ourselves under pressure and that cost us points. We need to be better than that.

"Worcester made us work hard but we should have played better and been more accurate. With the dominance we had in the game, the five tries was a poor return and we need to tighten things up."

"It was a huge effort on our part today and I can see something building nicely.

"We are bitterly disappointed with the loss. The players are already talking about next weekend because the signs are there and things are better than last season.

"We had the worst possible start, being 14-3 down after 12 minutes. We had the ball but they scored two great tries.

"You wouldn't expect to lose tries from that distance and it put us on the back foot. We lost Chris Pennell and Shaun Perry to the sin bin but we showed great character in the way we battled back."