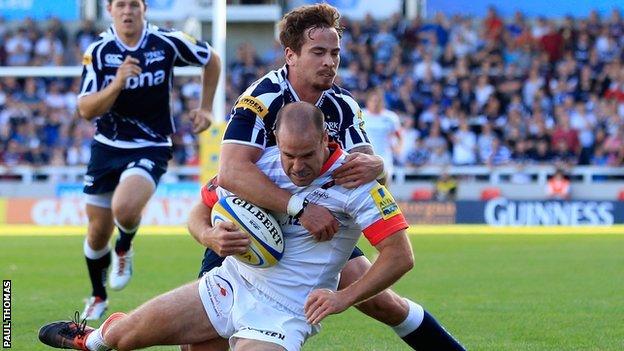 Danny Cipriani drew first blood from the tee at the Salford City Stadium but he was quickly outscored by Hodgson who landed four first-half penalties.

Will Addison's converted try gave Sale the perfect start after the break but the hosts could not build a score.

It was the two fly-halves coming together that provided the first genuine chance of a try when Hodgson charged down Cipriani's clearance and although the younger man caught his opponent Hodgson offloaded.

But with Brad Barritt stretching for the line Sam Tuiitupou put in a huge hit to dislodge the ball for a knock-on.

Sarries were pressurising their hosts in the set-piece and through their kick-chase but Sale were also conceding turn-overs and more than once it was only the visitors' poor handling out wide that prevented the score getting away from them.

After the break it was Sarries' weakness out wide that handed Sale their try as, under pressure of the hosts' blitz defence, Will Fraser patted the ball straight to winger Addison.

The 20-year-old comfortably outpaced Hodgson's covering tackle to score under the posts.

Hodgson made it a one-point game on the hour, after he pulled an earlier shot wide.

Ashton then rounded off a superb score that started with a driving maul inside their own half and when the ball reached Alex Goode he broke the line and found his winger.

Hodgson's conversion made it 20-16 three-quarters of the way through and eight minutes later he rounded off the scoring for a comfortable win.

"I thought we were a lot better than last week, which was the key thing.

"We lacked a little bit in confidence in certain parts because of last week's drubbing.

"We needed to get a better performance and I thought we got that for the majority of the game.

"We didn't get the rub of the green on certain occasions. I think it was 9-0 on penalties at scrum time and we have to look at that and see why."

"I thought for the first 25, 30 minutes of the match we were massively in control, built a 12-3 lead. It could have been more.

"They gave away countless penalties in their own 22, which Charlie kicked. But they were try-scoring opportunities. It was frustrating for us that they kept 15 men on the pitch during that period of time."

"One of the strengths of our group is that ability to deal with the odd setback here and there, especially away from home, and I thought we showed a lot of composure, a lot of control and a lot of ability to come back and see out the game."