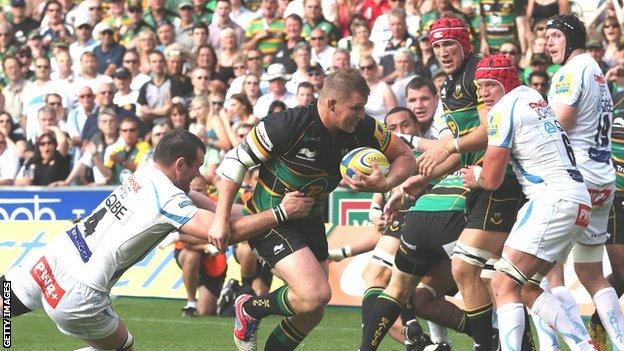 Northampton had to come from behind to secure a bonus-point win against a dogged Exeter Chiefs side.

Saints went ahead through Christian Day and Phil Dowson tries but the boot of Ignacio Mieres and Phil Dollman's try put the Chiefs ahead at the break.

In the second half, substitute Luther Burrell raced through before skipper Dylan Hartley secured the try bonus.

But the visitors threatened until the end and a late score by winger Matt Jess ensured a deserved point.

Saints maintained their hoodoo over Exeter, who have only beaten Northampton once, thanks largely to the dominance of their pack.

The hosts' set-piece advantage was obvious early on and, when they began to assert their quick-tempo game on the Chiefs, after both kickers had missed easy shots at goal, it was just a matter of time before the hosts scored.

Saints had already gone close twice before Ben Foden's counter-attack saw Vasily Artemyev pop the ball up to Day for the opening try on 17 minutes.

Lamb missed the conversion but, after Mieres pulled his second penalty wide, it was the Saints fly-half who carved open the Chiefs for their second score.

More fast offloading ended with Dowson crashing over from a yard out, Lamb landing his first kick from the left touchline.

The Chiefs were on the ropes but, just when it looked like Exeter might capitulate, Josh Tatupu danced out of a tackle on halfway and fed inside to Dollman who stepped off his right leg to race under the posts.

Mieres converted with ease to make it 12-7 on the half hour, atoning for his earlier missed penalties with six points in quick succession to make it 13-12 with two minutes to the break.

Saints then lost number eight Gerrit-Jan van Velze for a "tip" tackle on Will Chudley, a sin-binning which carried over into the second half.

Eight minutes into the half, in the last play before the return of the number eight, the Chiefs broke out on halfway and came close to extending their lead.

Mieres then did make it a four-point lead for the visitors on 50 minutes but, when Burrell burst through five minutes later, Saints were ahead once more.

Substitute Stephen Myler missed the conversion to leave it 17-16 before a training-ground move from a five-metre line-out saw skipper Hartley race round and drop over the line for the bonus point.

Myler's extras made it 24-16 with just over a quarter of an hour to go but he missed a penalty attempt and when Rhys Oakley was sin-binned for tripping a player the visitors capitalised.

"Our performance was a mixed bag. We were good in the first 20 minutes, scoring two good tries, but then we relaxed, kicked loosely and going down to 14 men put us under some considerable pressure.

"However, we kept our cool in the first 10 minutes of the second half and then our forwards went on to dominate."

"I am pretty pleased. On the two previous occasions here we have been comfortably defeated. Last season we lost 33-3.

"But today we were in the lead at half-time and were competitive to the end. It was by far our best performance here and we made it very edgy for Northampton right up until the end.

"However, we kicked away too much possession in the first quarter but after that we looked a good side and kept playing with tempo."