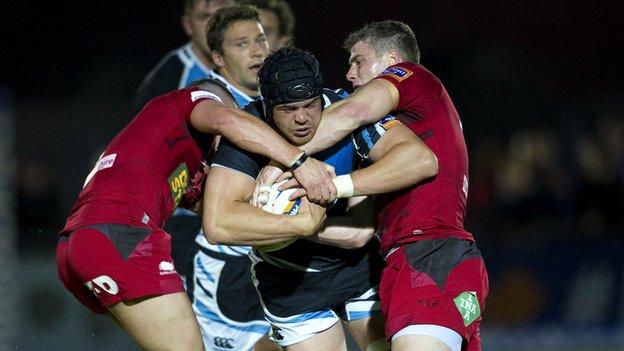 Glasgow lost at the hands of Scarlets in the first Pro12 match held at Scotstoun Stadium.

Tries from Aaron Shingler, Andy Fenby and George North boosted the visitors but stand-off Rhys Priestland failed to convert in a poor night for kicking.

Ruaridh Jackson kicked two first-half penalties for the home side only to be replaced at the break by Duncan Weir.

Chris Cusiter rallied Warriors with a try late on, but with five minutes remaining the Welsh side left victors.

The result leaves head coach Gregor Townsend looking for his first victory since taking charge of the Warriors from Sean Lineen at the end of last season.

Scarlets on the other hand maintained their good start to the new Pro12 season with a second win and in the process spoiled the party of the Glasgow side, who welcomed fans to their new Scotstoun venue.

Priestland, who was to go on to miss another penalty and both conversions, failed with his first in just two minutes.

Five minutes later Jackson put Glasgow ahead with a simple effort and the game settled to a midfield slog.

In the 26th minute Glasgow, counter-attacking down their left, lost possession and the ball was switched to the other wing by Scarlets. North supplied the inside pass to Shingler, who flopped over the line.

Four minutes later Shingler turned villain when he was sent to the sin-bin for a high tackle - but Jackson could make nothing of the penalty chance.

Further loose Glasgow possession in the Scarlets half set up a 38th-minute foot race to the home line after Jon Davies kicked the ball deep into Glasgow territory, with Fenby the winner.

However, there was still time for Jackson to at last notch a penalty success just before the break.

Priestland kicked a 46th-minute penalty and 12 minutes later swift handling by the Scarlets backs finished with North touching down.

Glasgow threw everything into the closing stages and were rewarded with a late Cusiter try converted by Weir - but that was the extent of the comeback.