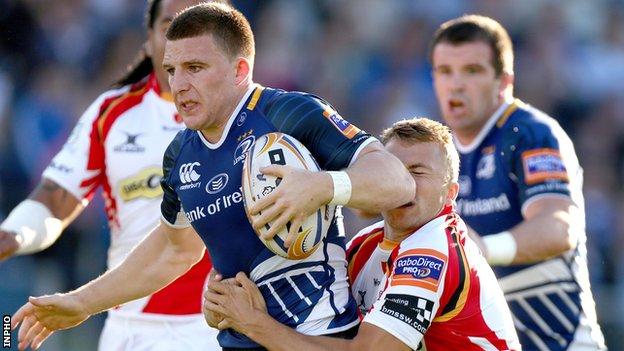 Ian Madigan's 18 points helped Leinster edge out the Dragons in an entertaining Pro12 clash at the RDS.

Leinster's first-half tries from Andrew Conway and Ben Marshall were split by Steffan Jones' Dragons score as the home side led 26-13 at the break.

The Dragons, looking for their first win in Ireland since 2008, took an early lead thanks to a Prydie penalty before Madigan quickly levelled.

From the restart, Noel Reid's break set up Leinster's first try for Conway with Madigan adding the conversion.

However, the Dragons hit back to level with Jones running in a try after intercepting a Reid pass.

Madigan and Prydie swapped penalties before another three points from the Leinster fly-half and Marshall's try gave the home side some breathing space.

The Dragons had prop Nathan Williams sin-binned late in the first half and Leinster exploited their numerical advantage in the opening minutes of the second period as Jennings and Carr notched tries in quick succession.

Leading 38-13, Leinster then began to lose their way as a Dan Evans break set up Prydie's try.

More Leinster sloppiness enabled full-back Evans to score a try of his own in the 59th minute as he outpaced Isa Nacewa after Prydie's break.

Having cut Leinster's lead to 38-25, the Dragons produced more late pressure but the home defence was resolute and Macken broke from his own half in injury-time to round off the Irish province's win.