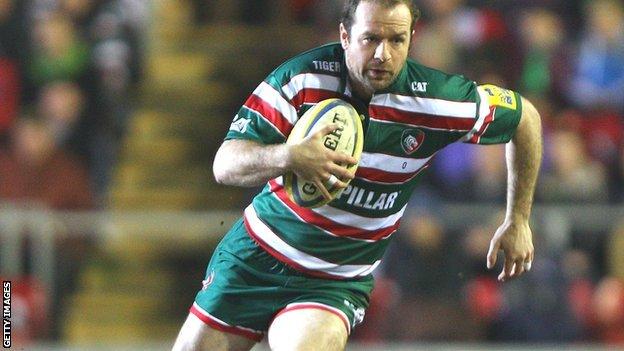 Veteran Leicester Tigers captain Geordan Murphy is planning to retire at the end of the season.

Murphy, who took over as captain in the 2008/09 season, is joint-owner of an Italian restaurant with Tigers prop, Martin Castrogiovanni

But he told BBC Radio Leicester: "It's planned to be my last contracted year.

"If I feel I can continue playing then I will be baying Cockers [Tigers director of rugby Richard Cockerill] for another contract, but if it's time to go then it's time to go."

Murphy, who has played in seven Premiership-winning teams, four Heineken Cup finals and has also won 72 caps for Ireland, added: "I love it a lot and would contemplate staying on, but I don't know what shape my body will be at the end of the season."

"I'm hopefully going to sign off with some silverware."

He made his Tigers debut as a teenager in November 1997 and has played more than 300 games for the club.

"Things went fantastically well in my first three years, but I didn't ever expect to play for the first team," said Murphy, who announced his retirement from international rugby in May.

"I was offered another three-year contract and went on to win European trophies and lots of other silverware. At the end of that, I felt very loyal to the club and sort of made it my home away from home."