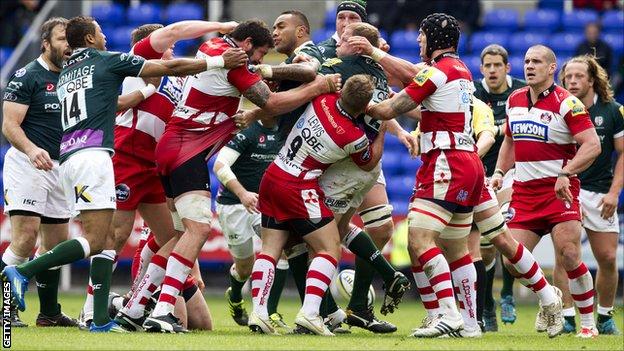 London Irish director of rugby Brian Smith says there will be no repeat of the disgraceful scenes of last season's game against Gloucester when the pair face each other in Reading on Saturday.

"There is not going to be trouble this weekend, I am certain of that," Smith told BBC Berkshire.

"I think both clubs got clobbered last season."

Smith, whose side were defeated 40-3 by Saracens on the opening day of the season, revealed London Irish had been working hard in the summer to improve their discipline.

"The message was sent to our club and to the whole league that [Rugby Football Union chief disciplinary officer] the Honourable Jeff Blackett is not going to put up with any of that nonsense," he said.

"We don't condone it, we've suffered with sanctions for two players because of it and as a result of that we have taken some big measures in the off-season.

"Judge Jeff Blackett has been here, we've got referees here every week helping us with our decision making in the contact area.

"The players have all sat referees exams and the whole theme of our pre-season has been discipline."