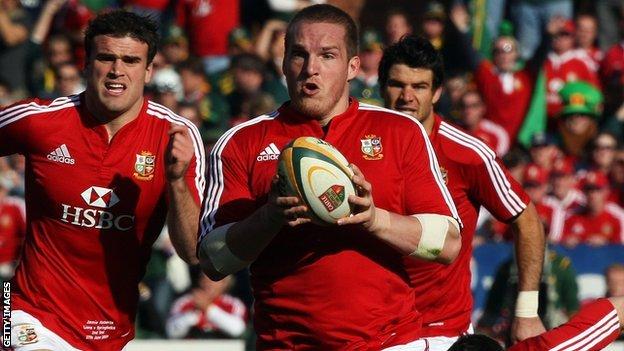 Toulon will block Gethin Jenkins from facing Australia for Wales in December after a similarly tough stance on his availability to start the 2013 British and Irish Lions tour to Australia.

Other France-based Welshmen could suffer the same fate.

"We said again that we would not release him to leave with the Lions on 27 May if we are in the final.

"He understood. I think he already knew when he came to the meeting.

"We did not talk so much about the Lions. It was more about Gethin's availability for the November and the Six Nations.

"On 1 December, the Welsh play a Test against Australia outside of the [International Rugby Board] window and we told them that the position of principle was the same as for the Lions tour: 'No'."

Earlier Wales and Lions coach Gatland warned French-based Lions contenders that being unavailable for the tour party's departure could harm their hopes of selection.

However, lock Luke Charteris has ensured his Wales availability, but has yet to confirm a similar arrangement should the Lions want him.

The Lions kick off their tour on 1 June against the Barbarians in Hong Kong.

But if Toulon reach the Top 14 final, also on 1 June, Jenkins will be expected to play for them.

Laporte added: "If he plays in the final, he will leave the day after, on Sunday, 2 June, but not before.

"We won't pay a player who has to go and play for the Lions at the most important time of our season.

"There is no specific clause in his contract about it."

Lions coach Warren Gatland has travelled to France to talk to squad contenders and their clubs about the issue of release.

Laporte's stance underlines the potential problems for any Lions hopefuls playing in France.

Jenkins, 31, who joined Toulon from Cardiff Blues ahead of the 2012-13 season, has already made two Lions tours.

He was in the party whitewashed 3-0 by New Zealand in 2005, then helped the Lions regain global respect in a 2-1 defeat by South Africa in 2009.