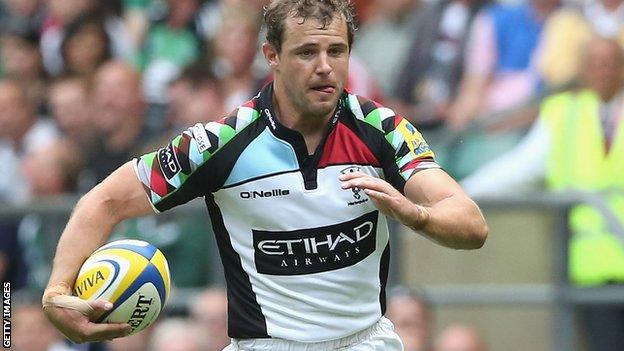 Harlequins fly-half Nick Evans has said he hopes to sign a new deal with the Premiership champions, while considering offers to play abroad.

The former All-Black, 32, is out of contract next spring after five seasons with the London club.

He says he would stay with the Quins if the terms are favourable but is not ruling out a big-money move overseas.

"I will not go back to New Zealand to play. If I was to move, it would be to France or Japan," he said.

"I have a few options and staying at Quins is one of them.

"Both sides are in talks at the moment and it's something we want to organise early because that suits both parties.

"I'm no spring chicken, but I'd also love to stay. We'll have to wait and see what happens.

"I've been away from New Zealand a while, but I do love London.

"I have a great time here and work really well with Quins. The company's awesome."

Evans scored the winning goal that saw Quins stage a stunning comeback in last week's 40-42 victory over Wasps, having trailed 40-13 early in the second half.

Evans also scooped the RPA players' player of the year award in March.