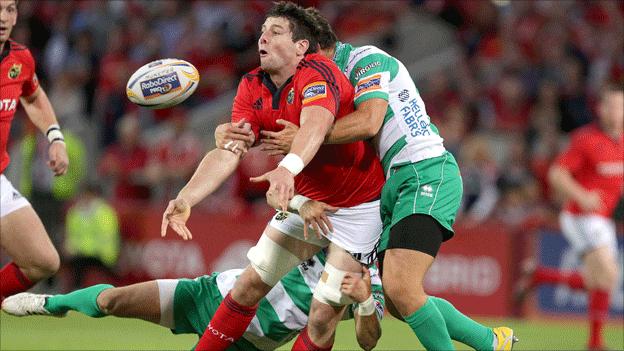 Treviso were unable to build on their surprise win over champions Ospreys as they lost to Munster in Friday night's Pro12 game at Thomond Park.

A Doug Howlett try and three penalties and a conversion by Ian Keatley helped Munster to a 16-3 half-time lead.

Alberto Di Bernardo scored a first-half penalty for the Italians and added another in the second half.

A Keatley penalty was Munster's only score of the second half as they kept up their winning start to the season.

Captain Howlett dashed through for a fifth minute try, in response to di Bernado's opening penalty.

The Italians were kicked in front by di Bernardo, but their lead lasted only two minutes as Munster hit back at them.

Damien Varley threw over the back of a lineout to Dave O'Callaghan who burst forward and Howlett timed his support run to perfection as he took the flanker's pass and thundered in under the posts.

Keatley converted and soon added his first penalty, with the home crowd enjoying Munster's eagerness to shift the ball and get their outside backs involved.

This attacking adventure under Penney was a feature in the win away to Edinburgh last Saturday, but a forceful scrum also yielded points tonight.

The Treviso front row popped up under the pressure and Keatley landed a 24th-minute penalty.

The penalty count increased against the Italians, allowing Keatley to push the gap out to 13 points.

Franco Smith's men got no reward for a strengthening scrum and better share of territory - a Luca Morisi counter attack might have led to a try but for a knock on from the supporting Williams.

After weathering an early second half storm from Treviso, Munster went in search of an elusive second try.

Keatley knocked on to spoil a brilliant break from Howlett and Casey Laulala, James Coughlan and Mike Sherry all went close during a purple patch for the Irish province.

Treviso lost centre Alberto Sgarbi to the sin-bin for not rolling away, leaking a further three points to Keatley in the process.

Munster's dominance of territory merited more but they were unable to finish off their chances.

Treviso came more into it late on, buoyed by di Bernardo's second penalty.

After previous warnings, Munster had replacement hooker Sherry sin-binned for hands in the ruck.