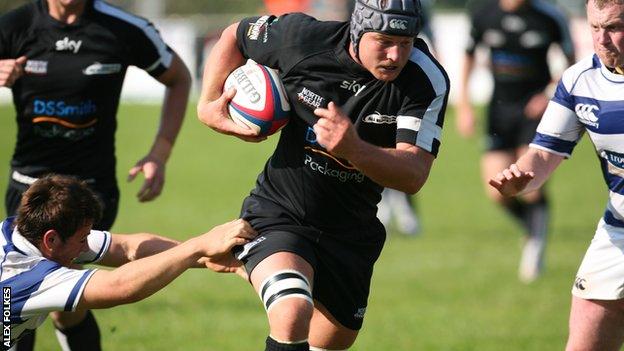 Cornish All Blacks stalwart Josh Lord says he is not worried about the underdog tag going into Saturday's Cornish derby in National Two South.

His side travel to Redruth's Recreation Ground on Saturday for the game that is being dubbed 'The Inferno in Kernow'.

"Everyone seems to have written us off, but the form book goes out the window on derby day," he told BBC South West.

"We've had a good week training and the guys are bouncing off the walls. Saturday can't come quickly enough."

The All Blacks lost their opening fixture at home to newly-promoted Chinnor 33-29, while Redruth won away at Taunton.

"We can't afford the lapses of concentration we had against Chinnor," Lord added.

"We need to cut out basic errors and improve our discipline and focus. If we give away 15-20 penalties again, it'll kill us."

The 30-year-old from Newquay is in his eighth season at Polson Bridge and is no stranger to the atmosphere at the Rec.

"If you want to win one of these games you have to give everything you've got and crawl off that pitch at the end," said the backrower.

"A few years ago the Redruth games were nasty, physical battles, but I think both sides probably try and play a bit more rugby than they used to.

"The crowd down there are pretty vocal and it inspires you. If we can get the right result on Saturday it could kick-start our season."

In a reshuffle to the pack, Mike Rawlings' return sees Barrie-Jon Chapman moving into the second row to replace the unavailable Ben Hilton.