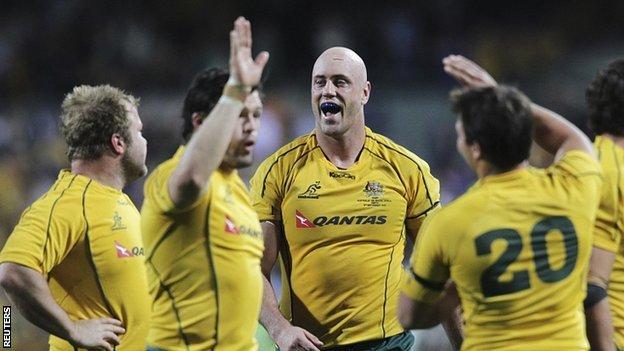 The Wallabies trailed 13-6 at half-time but second-half tries from Scott Higginbotham and Ben Alexander made it five wins in a row over the Springboks.

The All Blacks top the table after three straight wins.

Back-to-back losses to the All Blacks made the South Africa game a must-win Test for the Wallabies and coach Robbie Deans.

But the hosts were poor in the first half, falling behind to Springbok winger Bryan Habana's 42nd Test try.

South Africa, who drew 16-16 with Argentina in their last outing, had the edge at the set-piece and put in plenty of powerful running but lacked a spark in the back-line to convert the pressure they created.

And scores from forwards Higginbotham and Alexander and a perfect kicking display from Berrick Barnes, who kicked six from six, just about got the defending champions across the line.

There was one major downside to Australia's day however, as Will Genia - standing in as captain with James Horwill and David Pocock already ruled out of the championship - was forced off with a knee injury 10 minutes from time.

"I took a high ball and twisted and heard a few cracks," said Genia, who was on crutches with ice on the injured joint afterwards. "It's actually quite sore so I'll have some scans and see what comes of it."

In driving rain and gale-force winds at Wellington Regional Stadium, Argentina were brutal in defence and controlled the tempo of the game, at least until the final quarter.

The All Blacks led 6-5 at half-time, fly-half Aaron Cruden kicking two penalties and veteran prop Rodrigo Roncero scoring the Pumas' only try after centre Ma'a Nonu was turned over inside his own 22.

The stadium was plunged into darkness during the break because of a power cut, which delayed the start of the second half for about 15 minutes.

Cruden kicked a penalty shortly after the restart but it was not until the 66th minute that the All Blacks finally got a back-line move to work, Nonu and Conrad Smith committing players and feeding Savea for a try in the corner.

Six minutes later, Jane scored in the opposite corner from a long miss-pass by Cruden to put the game out of reach.

"They put us under a bit of pressure but I was very happy with the way we came out in the second half," said All Blacks captain Richie McCaw.

"We played at the right end of the field and that pressure told in the end."

Next Saturday, New Zealand host the Springboks in Dunedin while Argentina travel to the Gold Coast to play the Wallabies.