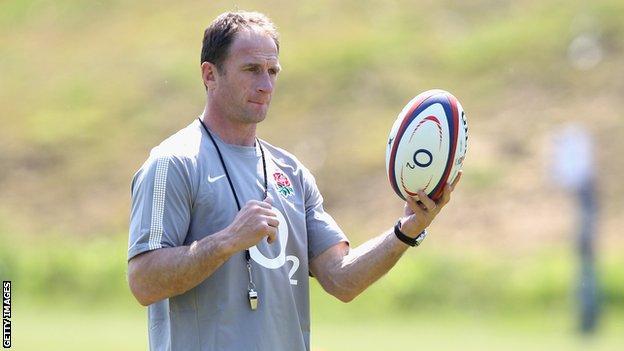 Mike Catt has been announced as England's attacking skills coach.

Catt, 40, was initially drafted into head coach Stuart Lancaster's backroom staff on an interim basis for the summer tour of South Africa.

"Mike made a big impression in South Africa, both on the players and the management," Lancaster said.

Catt, who was capped 75 times for England, added: "To be able to work with the coaching staff and the best players in England is a great honour."

The former utility back scored 142 points in an England shirt and was in the World Cup-winning side of 2003.

His coaching career began when he became player-coach at London Irish in 2007, and he left the club last summer to take up his former temporary role.

"I loved working with the squad in South Africa and, while gutted not to win the series, I can see that this group of players is heading in the right direction," he said.

Catt has been tasked to work with the senior and Saxons elite player squads on a permanent basis alongside Lancaster, forwards coach Graham Rowntree and backs coach Andy Farrell, and his duties begin next week.

Lancaster continued: "When we got back I asked him to outline his vision for developing not only the skills of the senior team, especially in attack, but with our younger players in the Saxons.

"We have always been an integrated coaching team covering all areas of the game and Mike will be a great addition alongside Graham and Andy.

"We have a massive challenge ahead of us with the internationals in November but beyond that we need to ensure we have the highest standards across all our representative teams and programmes and Mike will help deliver those."

England are next in action against Fiji at Twickenham on 10 November, with subsequent games to follow against southern hemisphere giants Australia, South Africa and New Zealand.