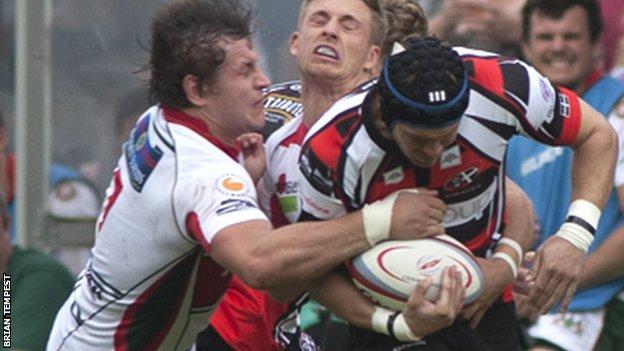 Plymouth Albion's Sam Hocking believes his side are heading in the right direction, despite falling just short against the Cornish Pirates.

Albion lost out 19-17 at the Mennaye to a last minute penalty, having led for virtually the whole match.

"There are good things ahead for us this season, all signs point to a good year," Hocking told BBC South West.

"The club had been on a downward curve these last few seasons but it feels like we've turned it around."

Hocking scored one of Albion's three tries, but they spurned several other good try-scoring opportunities and missed a number of simple shots at goal.

"We probably lacked a bit of composure in some key areas," he added.

"We let a lot of chances slip away and should have come away with more points from the first-half pressure we had.

"I think we surprised them with the way we started and tried to play, but when they were down to 14 men we failed to take advantage."

Despite the disappointment of losing out to a last minute penalty from Rob Cook, who re-joined from Gloucester on loan during the week, Hocking thinks the signs are encouraging.

The Cornish back row continued: "We talked about it afterwards and said the onus is on us as a team to take responsibility.

"This is a hard place to come and win and in the last couple of years we've come away with nothing.

"It's a hard defeat to take but we're definitely getting better."