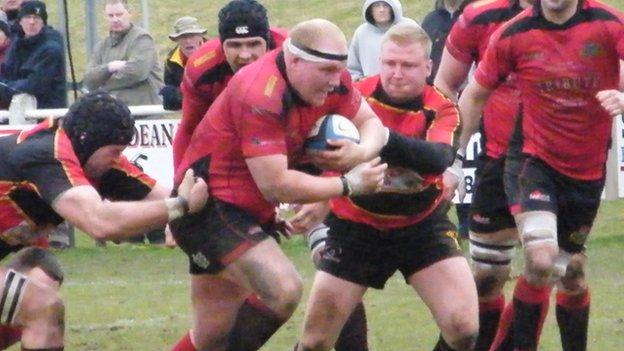 Prop Peter Joyce has made the move from National Two South to the Championship, after leaving Redruth to join the Cornish Pirates.

The 26-year-old bowed out in style in his final game for the Reds, with a 46-24 win over Launceston.

"I know the work I've got to put in," Joyce told BBC Radio Cornwall

"If it had happened two or three years ago I probably wouldn't have been up to it, but now I feel I'm ready to go there," he added.

After eight seasons at the Rec, it was a memorable finale for Joyce as the Reds recorded a thumping win over arch-rivals Launceston.

"It's been a brilliant day, everything has gone as I'd hoped," he added.

"I wanted to sign off in style for Redruth and that is exactly what we've done."

Second-rower Luke Collins scored a try in each half for the Reds, who led 46-12 with just minutes remaining, before the Cornish All Blacks scored two tries late on.

That gave them a four-try bonus point, but it was Redruth who held on to secure a maximum five points with the victory.