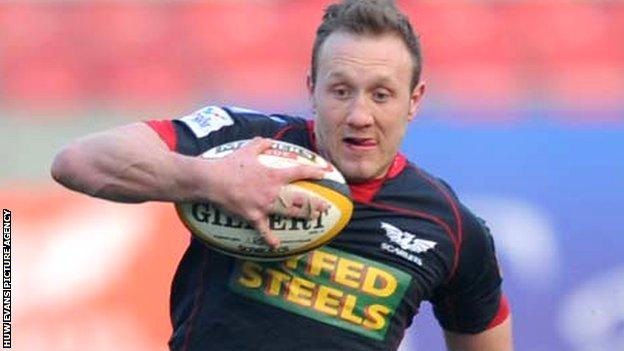 Scarlets and Wales back Morgan Stoddart is set to return to action after more than a year out because of injury.

Stoddart, 27, broke his left leg in Wales' pre-World Cup warm-up against England at Twickenham in August 2011.

"He's someone who will be available in the next three weeks probably for selection."

After breaking his leg against England, Stoddart received a message of support from Wales football captain Aaron Ramsey, who has fully recovered from a multiple leg-break.

Jones said the versatile back, who has won eight caps for Wales, will be eased back into action over the coming weeks.

"It's up to us [coaches] to see where he's at and decide whether he needs to come straight into the regional team or whether we think he needs a run out at semi-pro," said Jones.

"He's shown tremendous diligence and patience to get himself back to a good level. We just want to make sure now we don't rush him so that he's 100% when he comes back in.

"It's exciting, it will be like having a fourth overseas signing, which is great."

Having won their opening Pro12 games against Leinster and Glasgow, Scarlets will look to continue their fine start to the season on Saturday away to Connacht on Saturday.