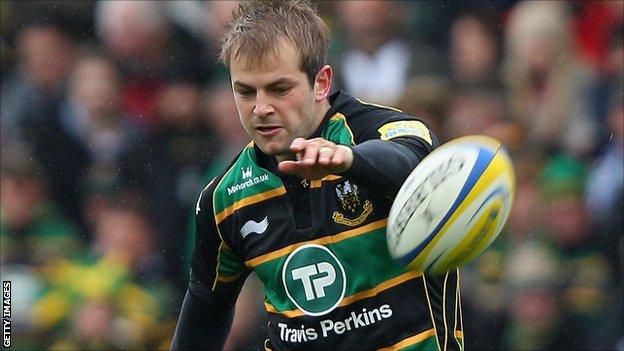 Stephen Myler's fine kicking display helped Northampton maintain their 100% record at the expense of Bath with a hard-fought victory at the Rec.

Saints responded to Nick Abendanon's first-minute try to lead at the break through four Myler penalties, despite a penalty in return from Olly Barkley.

Myler's fifth penalty added to the lead before two further kicks from Barkley brought Bath within a point of parity.

The only sour note for Saints was an ankle injury to England full-back Ben Foden after 55 minutes, with May coming on to replace him.

The doctor thinks that it's not broken. We're hopeful it's just a strain

Bath, under Gary Gold's stewardship, came into the game on the back of a success against Wasps in which Kyle Eastmond scored his first try, while Jim Mallinder's side were looking for a second west country success of the month after beating Gloucester in their last outing.

And it was Bath who started brightly as Tom Biggs slipped a grubber kick into the path of Abendanon and the full-back scored unopposed in the corner, but Barkley was wide with the conversion.

A driving maul from a line-out forced a penalty which Myler slotted for Saints, but the fly-half's sliced clearance from the restart was not so composed.

Bath used Hipkiss to take the ball up and Barkley slotted the resulting penalty.

Myler again narrowed the deficit to two points with a 35m kick on the quarter hour and he put his side ahead for the first time with a 21st minute penalty after Ben Skirving infringed at a ruck.

Yet another ruck offence by the home team just before the break was punished by Myler with his fourth penalty and Barkley hit the post with a 38m effort on the half-time whistle.

Saints overcame the loss of Foden to extend their lead as Myler added a fifth penalty for a scrum offence but that was quickly cancelled out by Barkley's boot at the other end after May's kick was charged down.

When the Saints scrum folded again, Barkley was on target from 45m to pull the home side back to with a point and Myler then missed from a similar distance to keep the home side's victory hopes alive.

May extended the lead to four points with a late drop-goal, leaving Bath four minutes to find a try and sneak victory, but Saints repelled a late assault and the home side had to be content with a losing bonus point.

"It's an ankle injury [for Ben Foden] but I don't know a lot more about it than that. The doctor thinks that it's not broken. We're hopeful it's just a strain.

"It's great to see Courtney [Lawes] out there. He missed the end of last season with a shin injury and dislocated his elbow pre-season.

"Bath have a good line-out and got stuck into ours. But any win away from home is pleasing. In terms of performance we're still not playing as we want.

"We've got a run of two home games coming up though and after a short turn-around - Sunday to Friday - to get the win is pleasing."

"Our overriding feeling is one of massive disappointment. It was a match of two halves as far as our kicking game was concerned.

"To be brutally honest, Northampton deserved to win the match. But Abendanon was outstanding, brilliant."

"We weren't accurate enough at the set piece and we conceded early penalties."