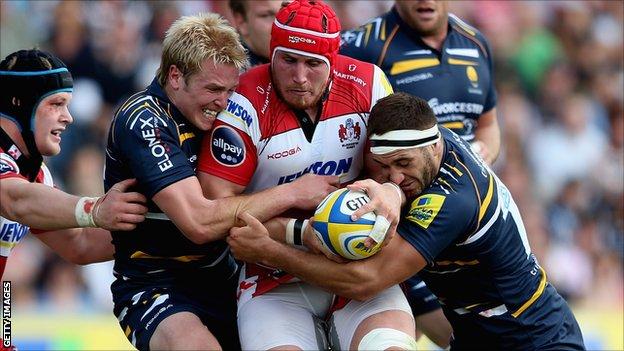 Henry Trinder's try on 64 minutes put the visitors 13-6 up, but replacement prop James Currie crossed to level the scores at 13-13 with 10 minutes left.

Andy Goode looked to have given the hosts the win with a last-gasp penalty, but Burns kept his cool to give Gloucester a share of the spoils.

Burns had been struggling with an ankle injury sustained in and was named on the bench, with Twelvetrees taking his place at fly-half.

And the former Leicester man put the Cherry and Whites ahead at the end of a scrappy first period, slotting over two penalties in the first 22 minutes.

Worcester had two chances to score an opening try of the game, but flanker Chris Jones and centre Alex Grove were denied by superb last-ditch tackles from Jonny May and James Simpson-Daniel respectively.

Goode, who took a knock to his left leg early on and had been successful with just one of his three attempts with the boot, was shown a yellow card in the closing seconds of the first half for pulling back his man off the ball.

The first half was becoming a story of missed opportunities, as from the resulting scrum Gloucester's Dan Robson fed Simpson-Daniel, but the former England winger could not take in the scrum-half's fired pass cleanly and he spilled the ball within touching distance of the try line.

Worcester, who had lost their opening two Premiership matches, held firm whilst operating with a man less and even managed to level the scores before Goode's return, Joe Carlisle taking on kicking duties for the hosts and levelling the scores less than two minutes after the interval.

The game finally sparked into life with the first try of the afternoon on 64 minutes. Shane Monahan found space on the right wing and fed centre Trinder, who crossed easily.

Burns, on in place of Mike Tindall, added the extra two points.

But Worcester responded almost immediately, recycling the ball well out wide before eventually finding Currie, who barged over to score his first Premiership try for the Warriors. Carlisle made no mistake with the kick and the scores were level again at 13-13.

The home side pressed for the win and looked to have claimed victory when Goode showed nerves of steel to kick a penalty inside the final minute.

However, with the clock ticking past 80 minutes, referee John Paul Doyle spotted a Worcester infringement at a scrum and Burns took advantage from long range to earn Gloucester a draw.

"It is a bit cruel, and a cruel blow for the players.

"We should have had a couple of scores in the first 30 minutes, yet we just lacked that little bit of composure, but there was a huge amount that was very positive today.

"The players are working hard and giving everything they possibly can. For me, there are so many good signs. We will get there.

"The players are absolutely devastated in the dressing room. We've played Bath and Gloucester at home and we should have won both those games."

"It wasn't the greatest game of rugby that has ever been played, but from our perspective it was really important we came here and got something out of the game.

"There is a lot more to come from us. I wouldn't like to think we will play that badly again, but we've come here, got two points and it keeps things ticking over.

"A draw was probably a fair result, but I was happy with our resilience and never-say-die attitude and I was also pleased with how we kept our composure in the last play of the game.

"We are finding our feet as a team, with new patterns and new systems, but we under-performed today and we know that."