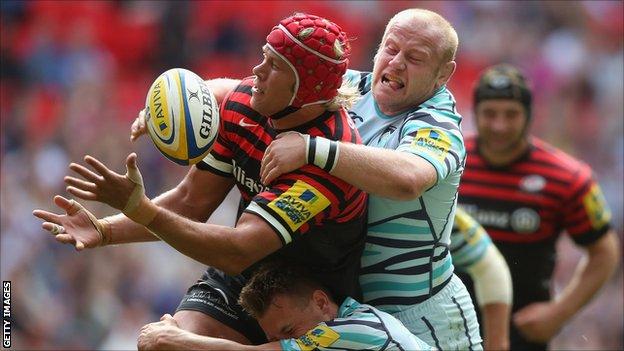 Saracens and Leicester fought out a low-scoring draw in front of a crowd of more than 41,000 at Wembley.

Owen Farrell had an off-day with the boot for the hosts, landing just one out of five penalty attempts in a lacklustre first half display.

But the introduction of Charlie Hodgson, who kicked two penalties, brought Saracens back on level terms.

Toby Flood kicked three penalties for Leicester and both sides remain without a loss in the Premiership this season.

Saracens had won on four of their previous five visits to Wembley, and it seemed the perfect setting for two of the pre-season title favourites to go head-to-head, as well as for Farrell and Flood to prove their international credentials.

The pair are likely to be battling for the fly-half spot in Stuart Lancaster's England side for the autumn internationals in November and the Six Nations that follow early next year.

And in the early stages, it was the more experienced Flood who seemed to settle better at Wembley, with the boot at least.

The former Newcastle man made no mistake with two penalties inside the first six minutes, while Saracens' poor start was exemplified by Farrell, who missed a routine kick to put his team on the scoreboard.

The youngster then shanked a second attempt wide of the posts.

And as Flood showed metronomic accuracy to extend the lead to nine points with another penalty, Farrell's struggles continued with a third miss.

His fourth attempt, arguably his most difficult, was successful to make it 9-3, but he failed to reduce the deficit further with another failed kick just before half-time.

If try-scoring opportunities had been at a premium in the first 40 minutes, they were even more scarce in a nervy second period.

Experienced campaigner Hodgson, the record Premiership points scorer, was introduced soon after the break and his influence was felt straight away, as he landed his first penalty attempt to bring Saracens back within three points of the Tigers.

They were soon level thanks to three more points from Hodgson as Saracens began to take control of the game.

But the kicking jitters would affect the 31-year-old too, as he sliced a drop-goal attempt well wide of the posts with four minutes remaining.

"Owen [Farrell] has not had much practice recently.

"He's had a small groin injury which has stopped him practising as much as usual and it's very rare he has a day like this.

"He's a magnificent player for us but every man has the odd bad day at the office and I know he has the strength of character to come back.

"He's the sort of player who will use a day like this to bounce back stronger so I'm looking forward to that.

"I think it's definitely a case of two points dropped here as we missed plenty of opportunities."

"In the first half, the lack of them kicking their goals helped us out a little bit but we need to look at our discipline in our own half.

"But that is two points we didn't have before the game, so that's 12 points from three games and it was a tough game away from home so we will take it and move on.

"There will be a lot of teams who will play Saracens and get nothing. We have two points and we will take that, which is a positive."