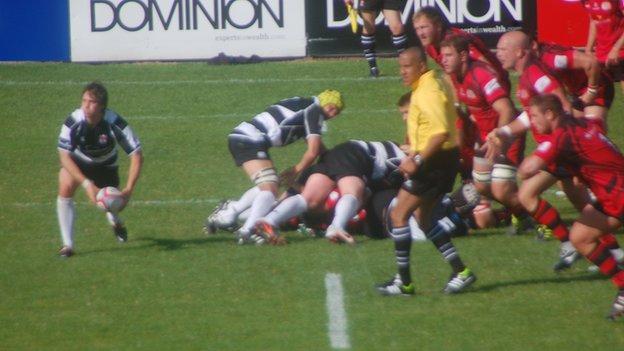 The centre's early try set the visitors on their way but Jersey hit back when Donovan Sanders touched down.

Hayter's second re-opened the gap but Glenn Bryce's try in the corner kept the islanders in touch.

I don't think we worked hard enough to be honest

Two penalties put Moseley 24-12 up at the break, with Hayter's third at the end the only score of the second half.

The defeat leaves the islanders bottom of the Championship table following three consecutive defeats at the start of their first ever season in the second tier of English rugby.

"This is a tough league to play in and it's a tough one to take on the chin.

"I'm not disillusioned, I still believe in what we're doing, but maybe it will just take a little bit longer to come together.

"We'll get there, we've got to stay positive, but there's a whole lot of room for improvement."

Again, Jersey made too many mistakes at crucial times against a strong Moseley defence.

Hayter's second came when the islanders were down to 14 men after Kingsley Lang was sin-binned.

Bryce's try was also in that ten-minute period but Jersey let the game get away, conceding too many penalties before the interval.

"It's a difficult place to come and get points and I thought we stuck to our game plan really well," hat-trick hero Hayter told BBC Radio Jersey.

"Jersey put up a really good effort, we knew it would be tough down here, so it was good to get the win.

"We're looking up the table and we want to finish higher than any season since we've been in the Championship."