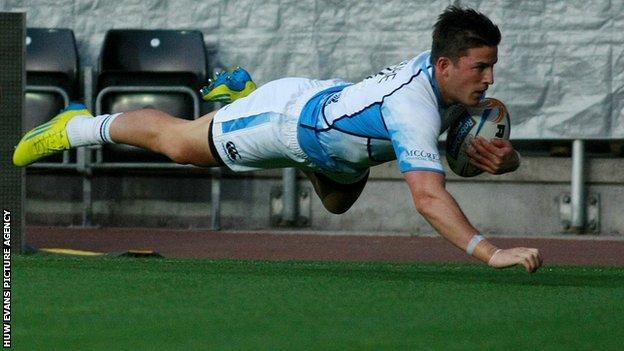 Glasgow won the battle of the Pro12's winless duo to consign reigning champions the Ospreys to a third successive defeat.

However, Glasgow's win was marred by a first-half shoulder injury to Scotland scrum-half Chris Cusiter.

The rot began for the Ospreys in the third minute when van der Merwe took full advantage of a poor chase following Biggar's high kick.

Glasgow's left wing evaded opponent Hanno Dirksen and ran from inside his 22 to outpace Biggar at the other end of the field.

However, the visitors suffered a significant blow when Scotland scrum-half Chris Cusiter departed with a shoulder injury after 13 minutes.

Weir converted a penalty following a technical offence committed in the incident that led to Cusiter's departure.

But Glasgow overcame the blow on a night when home scrum-half Rhys Webb's poor night played a part in their downfall.

The Wales international gifted Glasgow their second try as he fumbled at the base of a defensive ruck and Fusaro gathered for the simplest of scores for Weir to convert.

But having committed 12 handling errors in the opening 32 minutes left the home side on the back foot.

The visitors were 15-0 ahead at the break and after Webb was sin-binned for a professional foul in the 46th minute, Weir's penalty put them further ahead.

Glasgow were not without sin either, flanker James Eddie yellow-carded for pulling down a maul threat near their own line in the 51st minute to level the numbers.

And with skipper Alun Wyn Jones off the bench to spark a mini-Ospreys revival the Ospreys were able to profit with lock Ian Evans eventually breaking through.

Biggar converted, but three minutes later the visitors restored the comfort of their two-scores lead.

The Ospreys chanced a counter-attack from within their 22, but poor handling forced Dirksen into touch and gave Glasgow the initiative.

Van der Merwe took on the attack, escaping from Richard Hibbard's tackle before spinning and forcing his way over for Weir to convert.

Biggar added a penalty to offer a little more hope to the hosts.

But it proved forlorn as Weir's replacement Ruaridh Jackson also kicked a penalty to finish off his side's winning work.