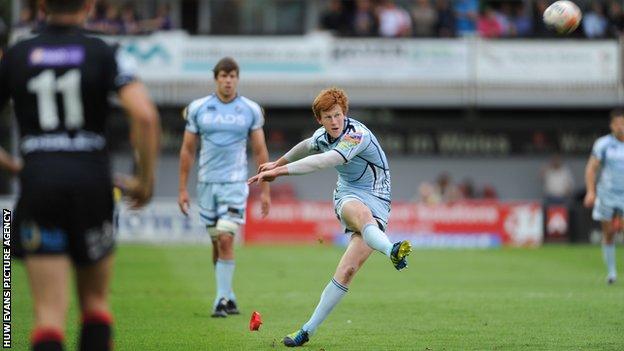 Newport Gwent Dragons led 5-3 at the break after Steffan Jones finished off a rare attacking platform.

But they failed to build on their advantage as handling errors littered their play, and conceded Cuthbert's try when the visitors were down to 14 men.

The derby struggled to ignite despite perfect conditions at Rodney Parade, with any hope of forward momentum thwarted as both sides fell foul at the tackle area.

They were also guilty of missing scoring opportunities as Tom Prydie and Jones missed penalties at goal for the home side, and Patchell wide with his first attempt for the Blues.

But the young fly-half grew in stature and only a marginal forward pass call prevented him from marking his first start by creating an opening try for Gavin Evans.

A superb covering tackle by Prydie on Cuthbert then denied the visitors once more, but Patchell's first penalty rewarded their efforts.

The Dragons responded immediately with Jones's try, set up by a typically dynamic run by Toby Faletau.

For once, the home side secured quick ball from a succession of rucks, and Jones stepped off his right foot to beat the stretched defence to score.

Prydie missed the straightforward conversion, leaving the Dragons with a slender half-time lead.

Prop Phil Price was held up inches short as the Dragons pressed after the break, with opposite number Nathan Trevett sent to the sin bin for an offence moments earlier.

But despite the numerical disadvantage, the Blues pounced on a Dragons mistake to score.

Centre Evans was awake to the opportunity and managed to get his pass away to Cuthbert, who raced home unopposed. Patchell converted.

The try came a minute after Jamie Roberts came off the replacements' bench for his first appearance since March after knee surgery.

But the Blues failed to make his presence felt as the mistakes continued, but Patchell held his nerve to land two penalties in the final four minutes to seal the region's first win at Rodney Parade since 2010.