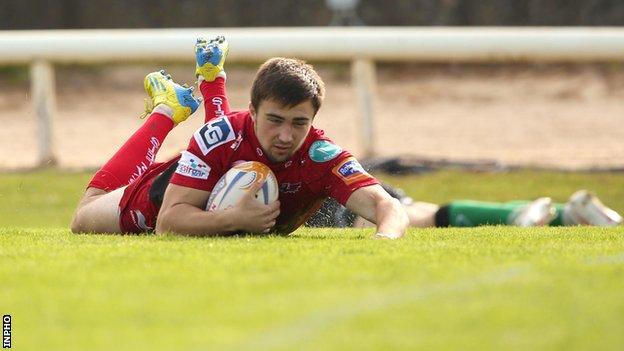 A Miah Nikora penalty and Eoin Griffin's try helped the home side lead 8-0 at the break.

However, Scarlets took control in the second half with Williams (two), George North and Jonathan Davies scoring tries and Rhys Priestland and Williams adding conversions.

Connacht's only score of the second half was another Nikora penalty.

Nikora, excelling at fly-half with the injured Dan Parks watching on, put the hosts ahead with a 10th-minute after a scrum offence by Samson Lee.

A Willie Faloon surge set up a try chance for the home side but skipper Gavin Duffy failed to hold Tiernan O'Halloran's pass.

However, Connacht did cross the try-line a minute before the interval as a superb pass from Nikora set up Griffin to score out wide.

Just 45 seconds after the restart, wing North burst through to create an overlap and pass for full-back Williams to slip over for his first try, which Priestland converted.

With the visitors finding their groove in attack, North then scored a try of his own as he brushed past Duffy's attempted tackle on the right to score another five-pointer.

Another missed tackle cost Connacht dearly as Williams evaded Griffin's grasp to score again to the left of the posts, extending the lead to 17-8.

Connacht responded with a penalty from Nikora on the hour mark and they pushed hard for a match winner until Davies intercepted Nikora's high pass in injury-time for a long range gallop to the line.