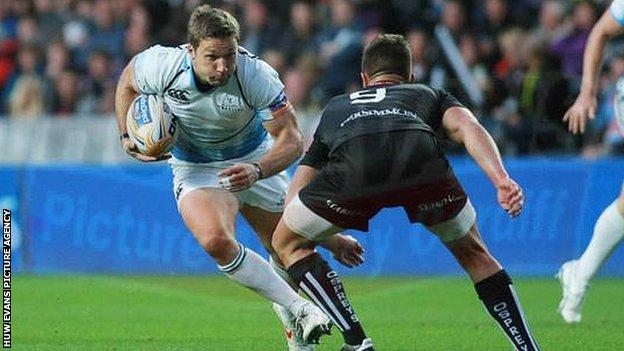 Glasgow and Scotland scrum-half Chris Cusiter is expected to be sidelined until mid-December after dislocating his shoulder against Ospreys.

The 30-year-old was helped off during his side's win at the Liberty Stadium on Friday.

Cusiter will not require surgery on the injury as was initially feared by coaching staff.

But he will definitely miss the autumn Test series against New Zealand, South Africa and Tonga.

"Everyone at Glasgow Warriors is disappointed that a quality player like Chris Cusiter is likely to be out of action until around the middle of December," said head coach Gregor Townsend.

"It's encouraging, though, that he doesn't need surgery, and we know he's in the best possible hands with our medical team.

"Chris is a tough competitor, and he'll be working hard to return to fitness and make a significant contribution to our campaign. We wish him well with his rehab and look forward to welcoming Niko Matawalu to the club to supplement our options in the scrum-half position."

Rob Harley, Ed Kalman and Pat MacArthur are expected to miss two months or longer with knee, back and foot problems, respectively.