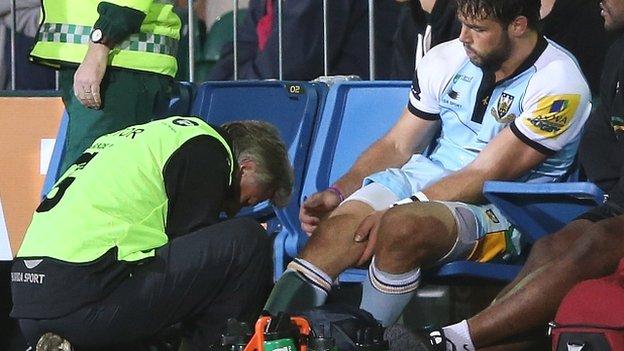 England full-back Ben Foden will have a scan on Monday to determine the extent of an ankle injury suffered in Northampton's win over Bath.

The 27-year-old was hurt in a man-and-ball tackle by Tom Biggs six minutes into the second half at The Rec.

He was in severe pain as he was helped off the pitch and later left the ground on crutches wearing a surgical boot.

Referee Andrew Small called for the TV match official to take a closer look at the incident but he confirmed there was no foul play.

Any lengthy spell on the sidelines could put Foden's participation in England's autumn Test programme in doubt.

England play the first of four internationals at Twickenham against Fiji on 10 November.

Better news for the watching England head coach Stuart Lancaster was the return to action of Northampton lock Courtney Lawes.

Lawes came on for the last 25 minutes for his first appearance since February.

"It's great to see Courtney out there," Mallinder added. "He missed the end of last season with a shin injury and dislocated his elbow pre-season."