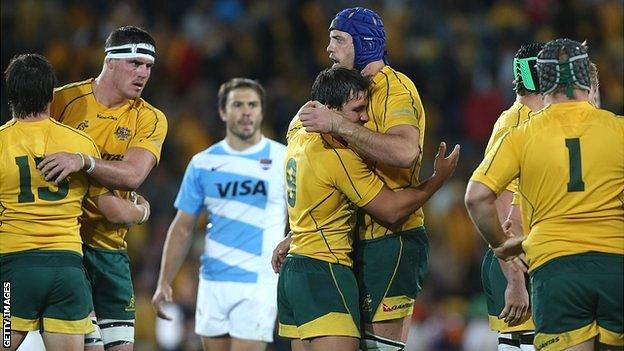 Australia survived a scare to edge past Argentina 23-19, while New Zealand beat South Africa 22-11 in the latest round of the inaugural Rugby Championship.

The Wallabies trailed 19-6 on the hour mark before tries from Pat McCabe and Digby Ioane prevented an upset.

It was a simpler task for the world champion All Blacks as tries from Israel Dagg and Aaron Smith saw them defeat the Springboks.

The All Blacks top the table after winning all four of their games so far.

Argentina, making their debut in the tournament this year, looked to be on their way to claiming their first ever Rugby Championship victory thanks to quickfire tries from Tomas Leonardi and Julio Farias Cabello at the start of the second half.

Replacement flanker Leonardi first charged down a kick from fly-half Quade Cooper, before back rower Cabello finished off some sharp work from winger Juan Jose Imhoff.

But the dismay of the home crowd on the Gold Coast was soon dispelled as the error-strewn Australians dug deep to claw back the spirited Pumas.

After a spell camped on the Argentina line, inside centre McCabe used his brawn to force the crucial breakthrough with a barrelling run.

The Wallabies went into the lead after scrum-half Nick Phipps made an intelligent blindside run and put winger Ioane in the clear.

A penalty kick at the death from replacement Kurtley Beale took Australia to 17 unanswered points in the final 20 minutes and secured the victory.

"Credit to them, they really put us under a lot of pressure at 19-6 but there is a great deal of courage and commitment to come back and finish so strongly," Australia captain Nathan Sharpe said.

In Dunedin, All Black full-back Dagg finished off an electric move to put the hosts 5-3 ahead at half-time but the Springboks hit back with a spectacular solo try from winger Bryan Habana.

He burst through a gap near the base of a line-out before chipping Julian Savea and regathering to score, but scrum-half Smith broke from the 22m on the hour-mark and side-stepped the cover to restore the home side's lead.

Two penalties extended their advantage and made South Africa pay for missing six penalties and a conversion.

"They were long range kicks and normally those kickers will put them over so we're thankful for that," New Zealand captain Richie McCaw said.

In the next round of games on 29-30 September, the All Blacks travel to Argentina while South Africa host Australia.