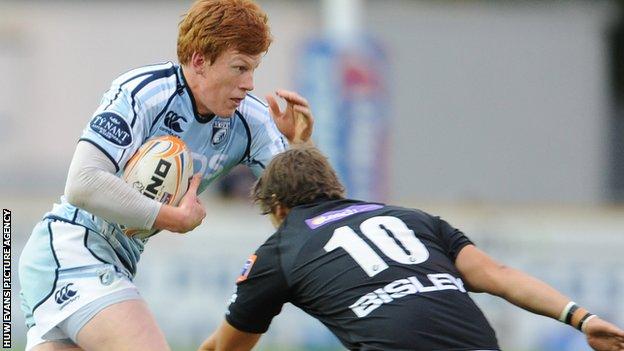 Cardiff Blues fly-half Rhys Patchell said he was consumed with nerves before his first Pro12 start on Saturday.

But the 19-year-old showed few signs of anxiety as he scored 11 points in a man-of-the-match performance in the Blues' 5-16 away win over the Dragons.

"If you would ask my mum she'd tell you I sat in bed all day before the game, I didn't do anything," he said.

"I was terrified on the bus but once I got the first touch the nerves settled. I felt okay after that."

Patchell came into the match with only 18 minutes of play as a replacement under his belt this season.

There was little sign of his inexperience against the Dragons at Rodney Parade, showing confidence to run at his opposite number and a willingness in defence to face the physical battle.

A match littered with handling errors and penalties at the tackle area limited the fly-half's opportunity to dictate play, but he kicked assuredly at goal, landing three penalties and converting Alex Cuthbert's try.

"It was a team victory. It's a pleasure to get the man-of-the-match award but it was a team effort," said the 6ft 3in Cardiff-born player, who is a member of the Wales Sevens squad.

"We worked hard throughout the week. We talked about how to win as a squad and that's what we did. We're so happy we got the victory."

The Blues were down to 14 men following Nathan Trevett's yellow card when a Dragons mistake led to Cuthbert's try eight minutes into the second half.

Patchell's conversion put the visitors 5-10 ahead and they never looked in danger of relinquishing their lead.

"That 10 minutes went well for us," said Blues flanker Sam Warburton. "We managed to get some decent territory and came out on top. From a sin-binning point of view that was very pleasing.

"We had to work so hard but we are absolutely delighted with the performance."