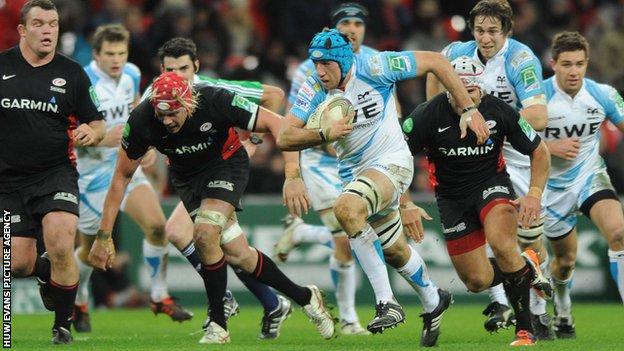 He believes the row between England's Premiership clubs and ERC, organisers of the Heineken Cup, has far-reaching ramifications for Welsh Rugby.

The English and French clubs want changes to the Heineken Cup, with qualification from the Pro12 a key issue.

"It's a can of worms and a case of sit down and see," said Jones.

"If you have qualification, each and every week there will be more competitive games and more of your international players have to play more often.

"That means the participation agreement between the Welsh Rugby Union and the regions comes into question because there will be more of a call on players at regional level."

Heineken Cup qualification for Welsh regions is currently based on how they finish amongst themselves in the Pro12 season.

The top three are guaranteed a place in European rugby's premier tournament, with the fourth entering the second tier Amlin Challenge Cup.

Three of the four Irish provinces are guaranteed a place, with the two Scottish and Italian clubs qualifing regardless of where they finish in the table.

The English and French clubs want a tougher qualification process where the top six sides, regardless of nationality, would qualify for the tournament.

This is the criteria facing Aviva Premiership and Top 14 clubs.

"Ultimately, there has to be a compromise and I think the qualification issue is going to be the compromise," added Jones.

Premier Rugby, which represents England's top 12 clubs, is in conflict with European Rugby Cup after it announced a £152m, four-year agreement with BT Vision.

But Jones is convinced the potential financial package on offer will be attractive to the Welsh Rugby Union and the Welsh regions, regardless of any compromise on qualification.

"The big carrot is the money on offer," said Jones.

"There is reputedly £100m to be shared amongst the four home nations and the Italians.

"That is a significant increase in funding for the Welsh regions. We all know the situation the regions are in financially at the moment.

"Any extra income will be of benefit to them. That's the carrot and real interest for the Welsh regions."

But ERC, which is also responsible for the Amlin Challenge Cup, claimed it was the only organisation that could negotiate TV rights and announced a four-year deal with BSkyB, running until 2018.

There is, however, currently no agreement in place to continue the Heineken or Amlin Challenge Cups beyond 2014.

Premier Rugby claimed it had been given authority to sell the rights as part of an eight-year agreement with the RFU signed in October 2007.

But that has been dismissed by the RFU, English rugby's governing body, which called for the Heineken Cup board to find a compromise when it meets in Dublin on Tuesday.