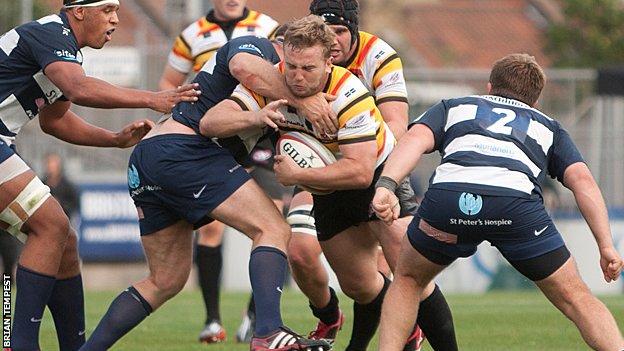 Cornish Pirates boss Ian Davies was disappointed not to get a point as his side lost 29-17 at Bristol.

Bristol lead 13-9 at half-time before Kieran Hallett's fourth penalty got Pirates within a point after the break.

Matt Evans' try gave the visitors a 17-13 lead but a series of injuries scuppered Pirates' hopes of a win.

"I don't know how many ladders I've walked under or black cats I've kicked, but we're picking up more than niggles

"I'm disappointed, the intensity was certainly there, the endeavour was there and we deserved at least a losing bonus point, if not the victory," Davies told BBC Radio Cornwall.

"In the first half we gave away some silly penalties and made some unforced errors which meant we had to work a lot harder than we wanted to.

"Bristol had thrown everything at us and we were quite confident going into the second half as we upped the tempo and Bristol were struggling.

"But when you've got three props on the field and a hooker playing in the back row it's difficult to control the game."

The injuries, which forced Davies to field players out of position and play the final minutes with 14 men, have hit his squad hard.

Kyle Marriott is a doubt for the visit of Newcastle next week with a hamstring problem while Wes Davies hurt his knee and Matt Evans was knocked out.

"I don't know how many ladders I've walked under or black cats I've kicked, but we're picking up more than niggles," Davies said.