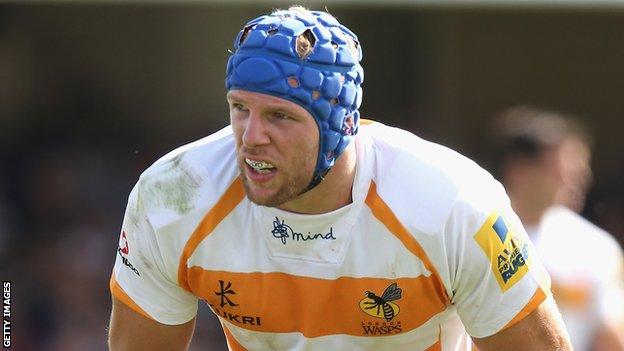 James Haskell believes the standard of the Premiership has improved during his time playing abroad.

The 27-year-old forward returned to London Wasps this summer after two years with Stade Francais and spells in Japan and New Zealand.

He told BBC London 94.9: "There was a massive pool of talent before I left and now it's even bigger and better.

"There are so many quality players. Every team is playing with a lot of intent and looking to use the ball."

He added: "The physical standard has probably gone up.

"It's always going to be very physical but there is a level it doesn't dip below.

The coaches and the team here are full of talent. Dai Young has created something special and in terms of the atmosphere, it's a good place to be

"When the weather changes, the team which can keep playing that [passing] brand of rugby will be the ones that go well."

Haskell, who departed Wasps in 2009, has spent the last year playing for Ricoh Black Rams in Japan and Otago Highlanders in New Zealand.

"It's been such a varied experience," he continued.

"In Japan, in an amazing culture, you learn about yourself.

"A lot was expected of me over there and I found I wanted to set an example and try and be a leader. That responsibility develops you as a person.

"In New Zealand, they have rugby as it really should be.

"They have small squads and a short, intense season. It's professional but the rugby was like [it was] 10 or so years ago in the UK."

Having been left out of England's elite squad this season, Haskell hopes his performances with Wasps will help him back into the reckoning for the national team and give him a chance to add to his 43 caps.

"To play for your county is the most important thing for any player and the fire still burns bright," he said.

"I want to go well for Wasps, first and foremost.

"If they go well then as a player the natural progression is to get selected for the national side."