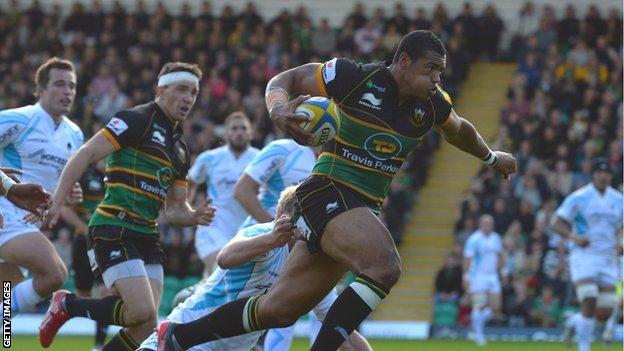 Northampton claimed a second bonus-point win of the season but Worcester fought back to take two points.

After an exchange of penalties, Stephen Myler made it 6-3 to Saints and Luther Burrell crashed over soon after.

Burrell claimed his second before tries from Vasily Artemyev, Courtney Lawes and Mike Haywood made it 37-3.

Jonny Arr, Josh Matavesi, Josh Drauniniu and Ollie Hayes all went over in a 16-minute spell before Goode converted at the death for two points.

Northampton have won all of their opening four Premiership games this season, while Worcester have now lost three as well as drawing against Gloucester last week.

Goode had given Warriors an early lead before Myler was twice successful with the boot and Burrell then blitzed past Chris Jones before running 25 metres to the line.

Burrell had added a second, his third in two matches, within five minutes when he stepped around the outside of Worcester centre Alex Grove.

Saints continued to dominate and added a third try when Rhys Oakley broke off a scrum and offloaded to Phil Dowson, whose superb reverse-pass found Artemyev free 20 metres out.

With the visitors 22 points behind at the break, Northampton secured their bonus-point when Lee Dickson sent over Lawes for the hosts' fourth try.

And it looked like they were set for a rout when Haywood burrowed over after Burrell had slipped in sight of the try-line and Ken Pisi dropped the ball on the line.

But there was still time left for Worcester to respond, as four of their replacements ensured they left Franklin's Gardens with at least a try bonus-point of their own.

Arr and Matavesi ran in a try each in the space of two minutes, Drauniniu then swept over and, after James Currie won a crucial turnover for Warriors to counter-attack, Hayes forced his way over from a line-out.

But the drama was not yet over as Goode, facing a conversion to secure a second bonus for finishing within seven points, missed his first attempt.

Saints were adjudged to have charged too early and Goode slotted the ball over the posts from the retake to make it a six-point losing margin.

"We dominated Worcester for 60 minutes. The positive from that last 20 minutes is that a lot of the players got some good game-time.

"Courtney was exhausted at the end, he has not played 80 minutes for months, Luther Burrell as well.

"It is good for them and if we are to win anything this year we need a squad and we need to get these non-15 players playing well."

"The Northampton coaches were very worried next to me. If the clock had gone on for another five minutes I think we would have sneaked that.

"I was thinking it was going to be a difficult week with a big game against London Irish on Friday coming up, but that last 20 minutes has certainly lifted spirits.

"I was annoyed about the first half. We got well and truly beaten, but it was a special second half, we played some good stuff and the passes stuck."