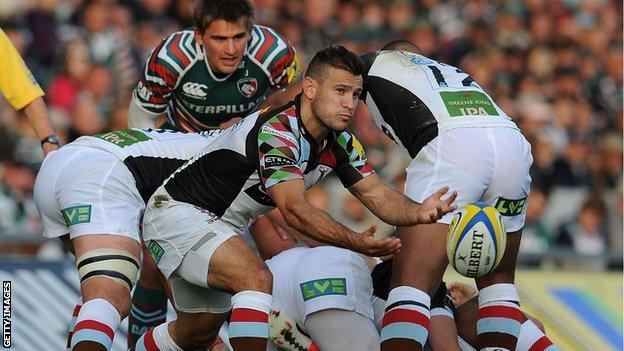 Leicester suffered their first home defeat for 11 months as Harlequins claimed their fourth win of the season to retain top spot in the Premiership.

Two Toby Flood penalties gave Tigers a 6-3 lead before Tom Williams went over for the visitors.

Danny Care's drop-goal made it 13-6 at the break and Nick Evans then landed his second penalty after the restart.

Flood added a third kick to reduce the deficit but Evans responded twice with the boot to secure victory.

The rematch of last season's two Premiership finalists was touted as an early-season highlight given Leicester's lengthy unbeaten run at Welford Road and Quins' perfect start to the season with three bonus-point wins from three.

But the champions, who were the last to win in Leicester with a 27-18 victory on 8 October 2011, made a clear statement of intent for the campaign ahead with a solid performance.

The two packs were evenly matched and the game was little more than an exchange of penalties, aside from a blistering Niall Morris break, before Evans prised open Leicester's defence with a cute offload to George Robson.

The second row fed Williams who raced under the posts with 20 minutes gone.

Care's surprise drop-goal kept Quins ticking over and after a penalty miss on each side, Matt Smith almost put Steve Mafi over for Tigers but for his pass to go behind the flanker and into touch.

The Premiership leaders started the second half strongly, Evans adding three more from the tee and they could have been awarded a penalty try when, under pressure in a series of five-metre scrums, the home pack collapsed on their line.

Promising breaks by Tigers scrum-half Sam Harrison and Quins centre Matt Hopper came to nothing before Ross Chisholm, on for Williams who left with a hamstring problem, produced a game-saving tackle on Julian Salvi.

But it proved costly as the winger was taken to hospital for an X-ray on his fibula and he joins Williams and Jordan Turner-Hall, who damaged an AC joint, on the Quins injury list.

Flood made it 16-9 but the winners were never in doubt when the ever-impressive Evans lined up two more shots at goal.

"Huge disappointment for the team as we didn't play well enough and made too many mistakes.

"We conceded a well-worked try but we gave penalties away and we weren't disciplined with or without the ball.

"We're not going to accept that level of performance, we need to go away and look at ourselves and put in a good shift next week.

"It's about everyone taking responsibility and we're a better side than we performed today. We have to look at our own performances and we have to improve."

"Any time you come to Leicester and get a win is exceptional.

"In the first half we showed we were a pretty good rugby side, in the second we showed the heart you need to be a great rugby side.

"It's only four games in 22 and next week we play Saracens but I could not be prouder of the guys because they put the effort in and showed a willingness to play.

"We know we need to be more clinical but it's early doors and we are happy with how we are progressing."