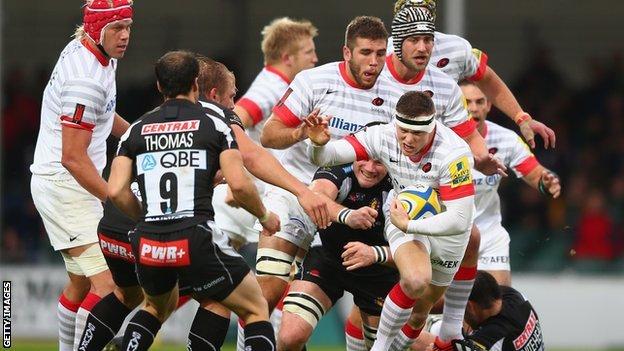 Exeter inflicted a first defeat of the season on Saracens with a gutsy victory in horrible conditions at Sandy Park.

The first half was dominated by the boot with Exeter's Ignacio Mieres outgunning Owen Farrell for a 9-6 lead.

The weather worsened after the break before Sireli Naqelevuki took advantage of Chris Ashton's sin-binning for the game's only try.

Saracens pressed for a victory but missed two penalty attempts and could not break their hosts down.

The Chiefs were embarking on a fearful run of games that will see them take on Leicester and Premiership champions Harlequins in the next fortnight, followed by Heineken Cup holders Leinster and French heavyweights Clermont Auvergne.

Recent defeats by Northampton and London Welsh meant a first win over Saracens at home was crucial.

It was Farrell, who had been wayward with the boot at Wembley last weekend, that broke the deadlock after 15 minutes with a simple penalty.

Mieres levelled within a minute and, after Farrell put Sarries back ahead, the Argentine repeated his feat on the half-hour when the visitors' skipper Kelly Brown was sent to the sin-bin.

The hosts, with a strong wind behind them, started to dominate possession and the set piece but Sarries managed to hold firm.

Mieres booted his side into the lead for the first time on 34 minutes before Farrell, who briefly departed for a head injury, pushed a kick wide, followed before half-time by a Mieres miss.

Exeter hands in the scrum ensured Farrell made it 9-9 soon after the break but his England colleague and team-mate Ashton was sin-binned for a dangerous charge into a maul with half an hour left.

Mieres missed the straightforward penalty that resulted but the Chiefs exploited Ashton's absence when giant Fijian centre Naqelevuki crashed over down his channel.

The touchline conversion was wayward and Farrell put Sarries back in touch to make it 14-12 when the Chiefs were caught offside.

Ashton returned just as Exeter hooker Chris Whitehead saw yellow for killing the ball but the Chiefs survived the 10 minutes with 14 men without conceding as Farrell slid the resulting penalty attempt wide.

Charlie Hodgson came on and lined up a shot from half way but missed.

James Short went close for Sarries in the left corner with six minutes left but was denied by solid cover defence.

"It was one of those scenarios - the clock is running down, and with a team like Saracens inside your own 22 you think this could go either way.

"We'd managed to stop them a few times with some good sets of defence but, to be fair, it was difficult to play a lot of phases of play in the conditions.

"So I was there thinking, 'come on boys, don't give up the penalty - make them have to play several phases'. And that's what we did and the error came.

"I am a big believer that you get what you deserve out of rugby and today we probably deserved it and I'd like to think the win shows that."

"The fact that they scored a try during that [Ashton's] sin-bin may have been our downfall. It was a difficult game in the conditions but their fundamentals were much better than ours.

"You can't afford to come to a place like Sandy Park and lose two men to the sin-bin. On top of that we gave away a number of other penalties which had consequences in the match."