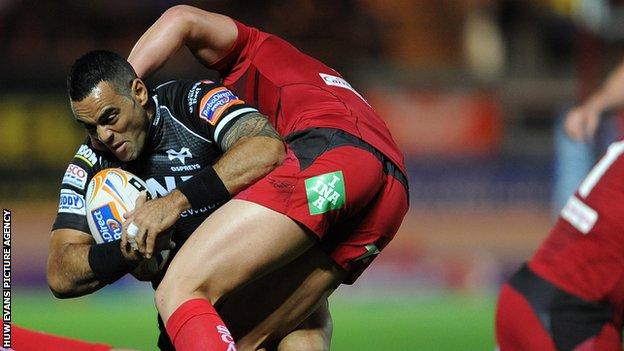 Ospreys ripped up the form-book as late tries by Ryan Jones and Hanno Dirksen helped them secure a derby win against early Pro12 pacesetters Scarlets.

Priestland's penalty tied the scores but quickfire converted tries from Jones and Dirksen put Ospreys ahead 9-23 with four minutes left.

The evening began on a sombre note of a minute's silence in tribute to Ulster centre Nevin Spence and the members of his family who died in a farm accident the previous weekend.

That was followed by fans from both teams chanting "Stand up for the Ulstermen" - a refrain always heard at Ulster's Ravenhill home.

When the action began, reigning champions Ospreys, arriving with three successive defeats, set about proving their credentials in a contest that was peppered with off-the-ball incidents, although none that led to any all-out hostilities.

The visitors' victory was founded on a strong scrum in which loosehead prop Duncan Jones earned the Man-of-the-Match award despite being on the field for only 51 minutes before being replaced.

Biggar failed with a drop-goal attempt after 23 seconds, leaving Priestland to kick the first points after four minutes following an early bout of hostilities.

That pushing and shoving was prompted by Osprey Joe Bearman's high tackle.

The visitors were level - briefly - when Biggar scored his first points, only for his opposite number's long-range effort to restore the hosts' lead.

"Ryan Jones had a major influence on the breakdown in terms of slowing Scarlets' ball down. Throughout the team each and every one stepped up a mark and delivered and [head coach] Steve Tandy will be delighted."

Another flare up, this time involving rival props Deacon Manu and Duncan Jones at a scrum, ended in the latter's favour for Biggar to kick his second penalty.

Scarlets centre Scott Williams' gamble on a solo burst when he had three men in support did not pay off.

And the hosts missed out again - controversially - when Andy Fenby dropped the ball over the line as he appeared to be high-tackled by flanker George Stowers.

Referee Leigthon Hodges asked video referee Derek Bevan whether or not a try had been scored.

Bevan said no, but Scrum V pundits Stuart Davies and Robert Jones agreed a penalty try should have been awarded against Samoan international Stowers.

Having seen that decision go against them, the hosts saw Biggar miss a chance to put the visitors ahead before knocking over his third penalty.

That left Ospreys 9-6 ahead at the break, but their attempt to go further ahead soon after the break was denied by Richard Fussell's forward pass to Hanno Dirksen.

At the other end Priestland levelled in the 48th minute, but held his head in his hands after his next shot drifted wide as the third quarter drew to a close.

By that stage back-rower Ryan Jones was on for his first Ospreys appearance of the season following a knee problem while the Scarlets had introduced his fellow former Wales captain Matthew Rees at hooker.

The Scarlets went down to 14 men on the hour when another set of fresh legs, tight-head prop Samson Lee, pulled down a scrum under the nose of referee Hodges.

The hosts survived without conceding a point during Lee's absence and Knoyle almost went over after Priestland's lofted cross-kick caused havoc in the Ospreys defence.

Dirksen could not gather under pressure and Liam Williams hacked ahead before the visitors' scramble defence halted Knoyle's progress.

However, in doing so the Ospreys were penalised, but Priestland's acute-angled penalty rebounded off an upright.

Worse was to follow for the hosts as Ryan Jones powered over on the blindside following some impressive approach work.

Biggar converted superbly from the touchline and two minutes after Jones' 72nd minute try, Dirksen slid in at the same corner.

Fly-half Biggar again converted to give the Ospreys their winning cushion.

The Scarlets' bonus-point reward came via video ref Bevan, judging that although North had crossed the dead-ball line, his touchdown on a loose ball was valid and Priestland converted.