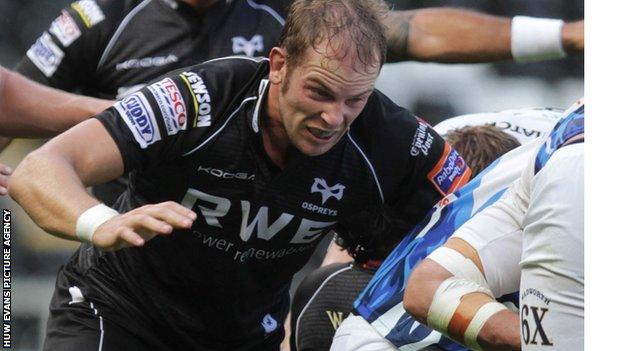 Captain Alun Wyn Jones believes the Ospreys only have themselves to blame for their early season form ahead of their Pro12 derby against the Scarlets on Friday.

Second from bottom Ospreys have lost all three of their matches so far.

They head to Parc y Scarlets to face a Scarlets side, who by contrast lead the table with a 100% record.

"We are beating ourselves. It's not the 15 guys on the other side," insisted Wales lock Jones.

"You look at the Ulster game - 23 turnovers, [of which] 13 were unforced. We are dropping the ball, we are knocking it on. When we cut those out we are going to have a lot more possession," insisted Jones.

"We had the lion's portion of territory, of possession [against Glasgow]. Eight minutes in their 22 and we didn't really convert that into points.

"We managed to get a late surge but the breakdown was the biggest area for us at the moment. Set-piece didn't go well and there's plenty to work on."

Added Jones: "Frustration is the biggest thing. It's not a case of the boys not trying, it's probably a case of trying too hard. We are not doing ourselves justice. We are well aware of that and the fans deserve more.

"We are not helping ourselves at the moment. We will get straight back on the horse and give it a go."

But despite facing the Scarlets, who have defeated Leinster, Glasgow and Connacht and are unbeaten at Parc y Scarlets in 10 Pro12 games, Jones insists it could be a good time to face their rivals.

"It's probably good for us [to be underdogs] to be honest," he said.

"It could be the tonic to put us back on track and where we need to be.

"You look at their backline. They can almost start with an international backline now and the forward pack - they have recruited well.

"They will be baying for blood from the west and you can't blame them - it's a derby."