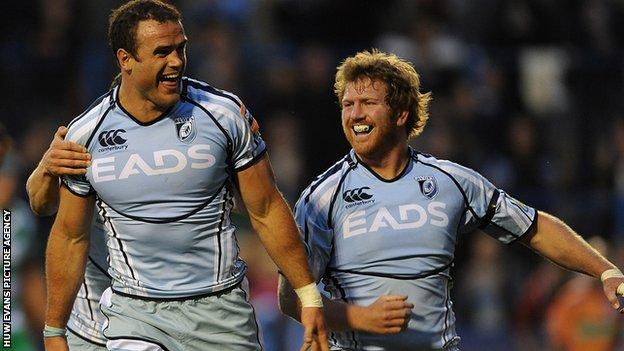 Jamie Roberts was among the try-scorers as Cardiff Blues secured their first home win of the season over Treviso.

The Wales centre, starting his first game of the season after injury, scored the Blues' second try after Dan Fish's opener.

Treviso's Robert Barbieri crossed for two second half tries as the visitors threatened a comeback.

But tries from replacements Jason Tovey and Campese Ma'afu sealed a bonus point win for the Blues.

Roberts, who was back in action after recovering from knee surgery, was one of seven changes to the Blues line-up.

But their promising start was rewarded on nine minutes when Patchell succeeded with his second penalty attempt to give his side a 3-0 lead, and within three minutes the Blues had extended their lead.

Dan Fish, after receiving a pass from Lloyd Williams, burst through the Treviso defence for the opening try, converted by Patchell.

The home side were controlling the game but Treviso fly-half Kris Burton claimed his side's points of the evening with a penalty.

Alex Cuthbert was denied a try after the touch judge ruled the wing had received a forward pass.

Patchell put a long range penalty attempt wide but the young fly-half was to play a prominent part in the Blues' second try.

The 19-year-old offloaded to Roberts, who evaded several tackles before powering over the line for his first Blues try since May 2010.

Treviso were reduced to 14 men early in the second half when Barbieri was shown a yellow card and they were further punished when Patchell added his second penalty of the game.

Despite being a man down, Treviso were presented with a try-scoring opportunity following a mistake by Roberts.

The centre's long pass for Patchell was intercepted by Giulio Toniolatti who had the try line in his sights.

But Patchell spared his team-mates' blushes by preventing the Italy wing from advancing further down the left flank.

The home side failed to reach the levels of their first half performance and allowed the visitors back into the game.

Williams managed to hold up Treviso scrum-half Tobias Botes over the Blues' try-line as the Italians threatened a dramatic comeback.

Barbieri, having returned to the field, drove over from five metres for their first try, which was converted by Burton to make the score 20-10.

Burton's second penalty of the game reduced the deficit to seven points but replacement Tovey, making his Blues debut since his move from Newport Gwent Dragons, settled the nerves.

Tovey broke away for a fine individual try after seizing on a Treviso mistake with Patchell's successful conversion created a 14 point advantage as the game entered the final 10 minutes.

Stand-in skipper Bradley Davies was shown a yellow card for illegally pulling a maul down and the home side ended the game with 14 men.

Treviso capitalised on the numerical advantage as Barbieri crossed for his second try although Burton failed to convert.

The home side had the final word with their fourth try in the final seconds with replacement prop Campese Ma'afu securing the bonus point.

It was Treviso's third defeat of the season while the Blues' third victory saw them move up to second in the table, albeit briefly before Munster's win over Newport Gwent Dragons.