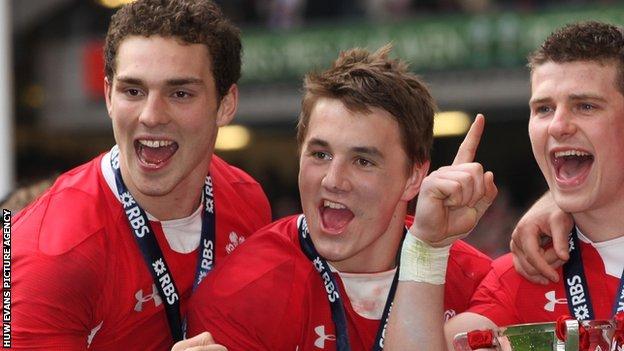 The Scarlets face Friday's Pro12 derby against the Ospreys with boss Simon Easterby claiming a player development edge over their rivals.

Easterby believes the Scarlets' squad rebuilding that began several seasons ago has helped them steal a march on the Ospreys, Newport Gwent Dragons and Cardiff Blues.

"Yeah, we are ahead of the other regions in that sense," said Easterby.

The four Welsh regions are operating a £3.5m salary cap.

But the Llanelli-based side can still boast an impressive, youthful back division.

In addition, the Scarlets pack includes back-rowers Josh Turnbull, 24, and Rob McCusker, 26, who have won caps in recent seasons.

The Ospreys have sought to kill off their "Galacticos" culture in recent seasons, losing the likes of James Hook, Mike Phillips and Lee Byrne to French clubs, while Gavin Henson also departed in 2010.

Ahead of the 2012-13 campaign, Ireland and British and Irish Lions wing Tommy Bowe returned to Ulster while Shane Williams announced his retirement before joining Japan's Mitsubishi Dynaboars.

Wings Hanno Dirksen, 21, and Eli Walker, 20, have joined the ilk of fly-halves Dan Biggar, 22, and Matthew Morgan, 20, scrum-half Rhys Webb, 23, and forwards James King, 22, Ryan Bevington, 23, and Scott Baldwin, 24, in advancing the cause of youth at the Liberty Stadium.

Cardiff Blues' top summer signing was lock Lou Reed, 25, from the Scarlets, but they lost 11 capped internationals, including star Wales and Lions prop Gethin Jenkins to Toulon while bringing in less-celebrated players.

The Dragons are viewed as perennial developers of players on annual budgets that have always struggled to match their Welsh rivals.

Recent Rodney Parade successes include wing Will Harries, 25, back-rowers Dan Lydiate, 24, and Toby Faletau, 21, while fly-half Steffan Jones, 21, has been joined by Wales' youngest-ever cap in wing or full-back Tom Prydie, 20, this season.

That leaves Easterby convinced his early Pro12 pacesetters are ahead of the game when it comes to developing home-grown talent with former boss Nigel Davies and development manager Gareth Jenkins having led the way.

He told BBC Radio Wales: "We had to take a look at where we were going as a club in terms of our recruitment and our development policy, probably three or four years ago.

"And I think we're seeing the rewards of that now.

"Nigel worked hard over the last couple of years to put some of those development players through and expose them.

"Gareth Jenkins works very hard developing those players from sort of 16 upwards and we're seeing some of those coming through now in the likes of Jordan and some of the front-row guys.

"So, yeah, we are ahead of the other regions in that sense.

"The challenge for us is being able to keep hold of those players because not all of them will be able to get rugby here.

"And hopefully we'll give them as much exposure as we can, but not do it too early in terms of affecting them too much in their early development.

"We'd prefer it, I suppose, if we've got the quality in our development, that it stays that way and the other regions can develop how they want.

"But I'm sure that there's plenty coming through at the other regions as well.

"We've just been fortunate, I suppose, that there's a crop of seven or eight players coming through who are still young.

"But we're starting to see them develop nicely in our senior squad now."