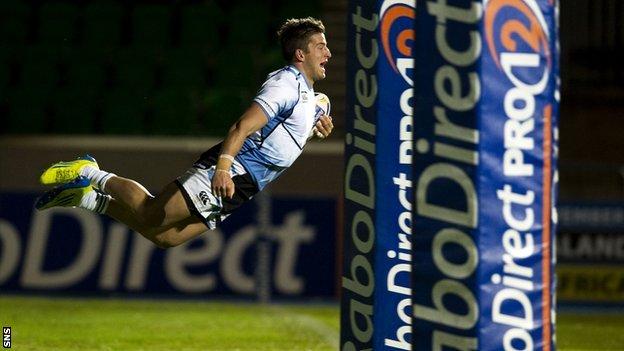 Van der Merwe went over for Glasgow early in the second half but Nathan White soon replied for Connacht.

But the Canada wing's second score ensured a bonus point and a second straight victory for the Warriors.

Gregor Townsend's side join third-place Edinburgh on 10 points in the RaboDirect Pro12.

Players and spectators observed a minute's silence before kick-off in tribute to Ulster centre Nevin Spence and the members of his family who died in a farming accident on Saturday.

Scott Wight, a late entry to the Glasgow team along with Tim Swinson after Duncan Weir and Tom Ryder were forced to withdraw, kicked the hosts ahead with an early penalty.

However, the fly-half's next attempt dropped short of the posts.

Kieran Marmion's kick from a Connacht scrum was charged down and Glasgow forced the ball wide right for Lamont to run in the opening try but Wight was once again off target.

Lamont was also involved in the hosts' second try, offloading to Murchie after a sweeping left-to-right move and the full-back's dummy wrong-footed the Connacht defence before he crossed. Wight converted.

But the visitors responded with a 10-point haul before the break.

McCrea and Glasgow's Henry Pyrgos chased Jack Carty's grubber kick over the try-line and the Connacht wing got the verdict after referee Alain Rolland consulted the TMO. Matthew Jarvis converted and then kicked a penalty in added time.

Similarities between the two strips often made it difficult to distinguish the teams in the first half and Glasgow changed to their away top at the interval.

Minutes after the restart, van der Merwe capitalised on Connacht's inability to gather a high ball and ran through to leap over the line, Wight adding the extras.

But a similar error by the Warriors allowed White to run in Connacht's second try and Jarvis maintained his form with the boot.

The five-point gap made for a tense period as the home side probed for a bonus point and the Irish visitors searched for parity and the possibility of getting in front.

And it was another burst by van der Merwe that proved decisive with the wing darting down the left to score. Wight's replacement, Ruaridh Jackson, was wide with his conversion attempt.

Jarvis's massive penalty attempt from near halfway dropped in front of the posts and Connacht were unable to force the try that would have given them a bonus point.