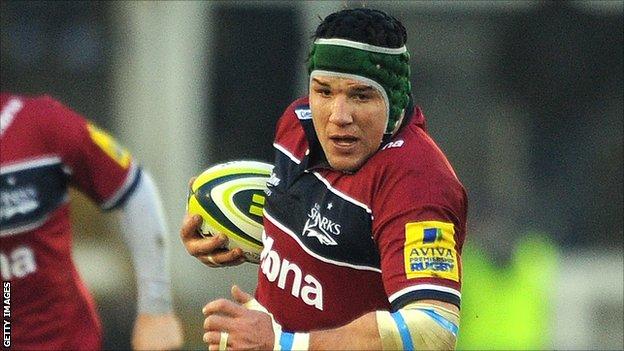 Sale's director of rugby Bryan Redpath is confident that England flanker Hendre Fourie will not be forced to retire because of a shoulder injury.

Fourie, 33, has only played 14 minutes of Premiership rugby since at the start of last season.

"He's been through a lot in the last year-and-a-half," said Redpath.

"He knows where he is and he needs to make sure everything is fully fit and fully functional. At the moment, it's not and he needs some time."

Speaking to BBC Radio Manchester, Redpath continued: "He's going through a tough time and we need to support him as much as possible.

"He's definitely not going to play until we assess him again in November. We're trying to give him time to rest and recover.

"Whether it's sooner or later, hopefully we can get him back in a Sale strip and back playing because he's a great player."

South African-born Fourie, who won the last of his eight England caps in August 2011, has not played for Sale since February.

He had appeared twice in the LV=Cup for the Sharks but was injured on his Premiership debut against Worcester.

Meanwhile, Sale are still looking for their first win of the season, having lost their opening three fixtures to Exeter, Saracens and Harlequins.

"You can be ambitious and say you were going to get 12 points from those three games, but there's not many teams that do," added Redpath.

"The performance against Exeter wasn't good enough, against Sarries it was improved, and at the weekend we created four opportunities and we never took any of them.

"It's disappointing and it makes Friday night's game [against London Welsh at the Salford City Stadium] huge for us."

Meanwhile, former Wasps centre Charlie Ingall has signed a one-year contract with Sale, having spent most of pre-season training with the squad.