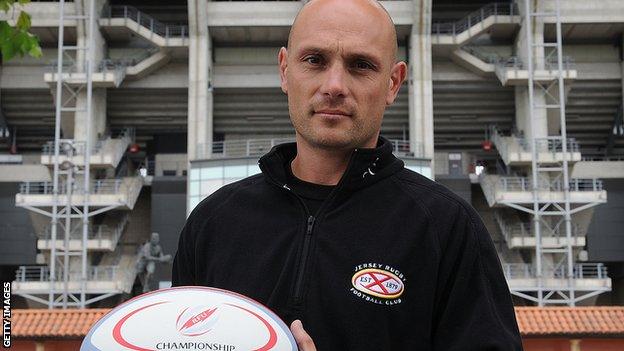 Jersey director of rugby Ben Harvey says his players will step up their defensive work after losing their opening three matches of the season.

The islanders are bottom of the Championship with no points, heading into Saturday's trip to Rotherham.

Jersey have conceded 10 tries and 83 points so far in their first campaign in the second tier of English rugby.

"It's just a question of saying defensively we've got to get better and better," Harvey told BBC Radio Jersey.

"Clearly you can't concede 31 points and have a chance of winning a league game.

"Last year we worked for a nine-week period just on defence and we're going to start a phase now which will be an awful lot of defensive work.

"We're going to make sure we're much more difficult to beat than we have been."

Harvey, who has overseen Jersey's dramatic rise up through the national leagues to the Championship, added 12 players to his squad over the summer months.

But he feels some of the new faces need to work on the defensive skills he demands.

"We've gone and actively recruited people with potential and they are young lads who've never played in the Championship," he said.

"We're not surprised with how tough it is and we knew how hard it was going to be.

"I've not gone out and got seasoned Championship players, what I've got is lads who I think will be extremely good but that will take time."