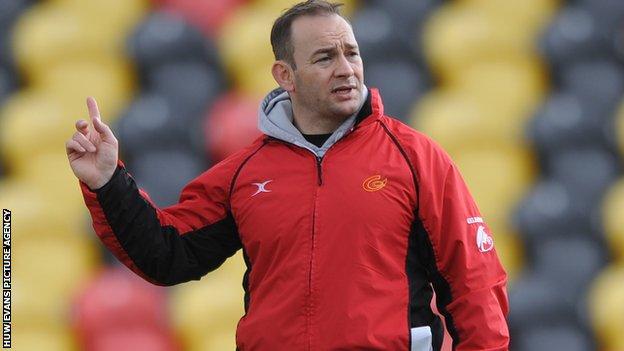 Newport Gwent Dragons head coach Darren Edwards admits the region could find it harder than ever to qualify if the Heineken Cup is revamped.

English and French clubs want changes to the competition, with qualification from the Pro12 a key issue.

The Dragons have been in the Amlin Cup, the second tier of European competition, for the last two seasons.

"In some ways it's fair enough. You should get rewards for your performances," Edwards said.

"We're not all operating on even playing fields at the moment.

The Amlin is really tough. That will still be a very, very good competition.

"Maybe that will make everybody readdress the businesses and see how you get into the top end of the tables."

European Rugby Cup, the tournament's governing body, is in dispute with Premier Rugby - which represents the English Premiership clubs - over a £152m TV deal with BT Vision.

Stakeholders of ERC met with the Rugby Football Union and Premier Rugby in Dublin on Tuesday and the talks were described as "productive."

Further discussions for a new agreement on the future of European club rugby will be held in Rome on 8 October.

Heineken Cup qualification for Welsh regions is currently based on how they finish amongst themselves in the Pro12 season.

Edwards concedes any changes would make it harder for his side to qualify for the Heineken Cup.

The Dragons are the only Pro12 side who will not feature in this season's Heineken Cup and will play in the Amlin Challenge Cup.

Their first game is on 13 October away to English Premiership side London Wasps and Edwards expects a competitive campaign.

"The Amlin is really tough," added the Dragons coach.

"We were down in Perpignan last year playing in the Amlin, which is a pretty tough place to go and a pretty good team.

"That will still be a very, very good competition."