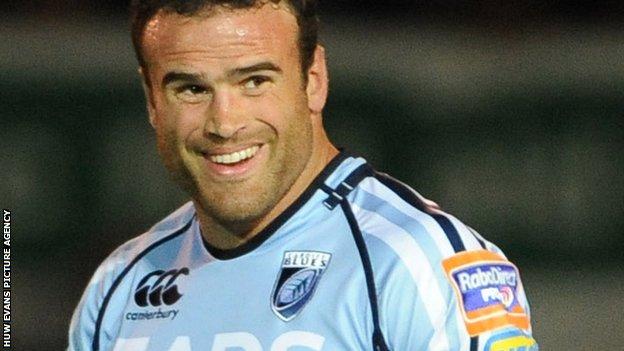 Wales centre Jamie Roberts says he has no idea where his future lies as his current Cardiff Blues contract enters its final year.

The 26-year-old, man of the series on the 2009 Lions tour, has been linked with a lucrative move to a French club.

Blues coach Phil Davies hopes Roberts will stay, but the region will face stiff competition for his signature.

"I haven't got a clue what I'm doing next year. I'm completely undecided," said Roberts.

"I haven't got a clue if I'm staying yet or going. Obviously my contract's up and I will have finished my medical degree.

"There's a lot to be resolved and hopefully over the next couple of months we'll get that all sorted. It's quite an exciting place to be.

"It's the first time in my life where I won't have any commitment with any university work. It is a big crossroads, and who knows. I haven't got a clue."

Roberts, who has been at the Blues since 2007, made his return to action last week after five months out with a knee injury.

He then marked his first start of the season on Saturday with a try in the Blues win over Treviso at Cardiff Arms Park.

Coach Davies inherited a Blues squad that lost 13 players over the summer through a combination of transfers and retirements.

He hopes to rebuild the region around stand-out internationals such as Roberts, Sam Warburton and Leigh Halfpenny, whose contract also expires at the end of the season.

"It's important we keep all our best players and Jamie's no different," said Davies after the Treviso victory.

"He's doing well for us at the moment. I've been in this game for a long time and we've got some great players here.

"We want to keep all of them obviously and hopefully Jamie will be no different in wanting to stay."

Roberts's long injury lay-off allowed him to concentrate on his medical studies, which will end with a final exam four days before Wales face England in the Six Nations.

He expects his future to have been resolved by then, and conceded that money will be one consideration in his decision.

A steady flow of Wales internationals have been tempted to France by the offer of higher wages. Welsh regions are unable to compete in financial terms in light of the recently introduced £3.5m salary cap.

"What a player does is very individual and everyone has got different circumstances - family, financial circumstances and they all play a huge part in decisions," said Roberts, who has won 44 caps for Wales.

"They'll certainly play a huge part in mine, and we'll see. There's a hell of a lot to weigh up and there's a huge crossroads in my life."