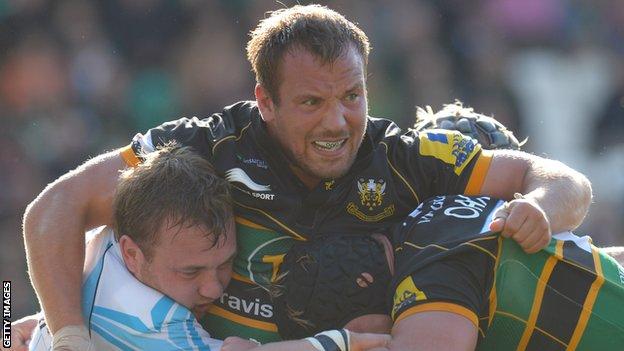 Northampton forward Paul Doran-Jones says the team were left reeling after a 16-minute spell against Worcester in which they conceded 28 points.

Saints still won the match 37-31 and are unbeaten in the Premiership this season.

Doran-Jones told BBC Radio Northampton: "We're a bit shell-shocked in there and it feels like we've come off a loss.

"We went off script and tried to sling the ball about a little bit too much. It's not what we do."

Saints had led 37-3 thanks to tries from Vasily Artemyev, Courtney Lawes, Mike Haywood and two from Luther Burrell.

"For 60 minutes we played some awesome stuff and defended with pride," said Doran-Jones.

"Fair play to Worcester, they played some great stuff towards the end and we were hanging on. We're a young side and it's a learning curve for us. Next time, we have to slow it down."

Only Saints and defending champions Harlequins have a 100% record in this season's Premiership.

"It's a great start for us and its what we targeted," said Doran-Jones.

"We're winning and perhaps not playing our best stuff for 80 minutes. If we can find an 80-minute performance, I think we'll be pretty dangerous."