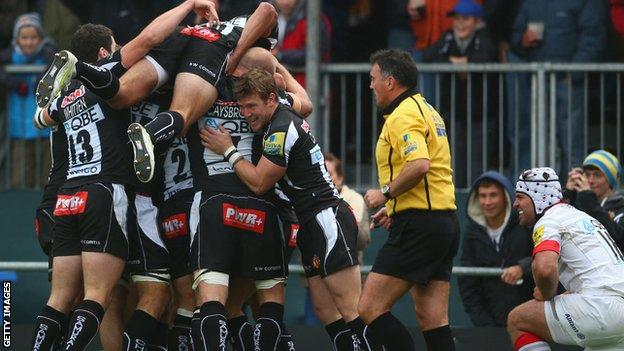 Exeter Chiefs boss Rob Baxter was impressed with how his side took their chances in their 14-12 home win against Saracens on Sunday.

"You could see us really firing once we got the ball in the danger areas," he told BBC Radio Devon.

"That's probably what we've been a little guilty of, firing all over the pitch but then we get to the kill zone and we lose a bit of that intensity.

The boys' temperament was exceptional, they stuck to the game-plan fantastically well and backed it up with some fine individual performances

"But we were better in that area and we got a reward with a good try."

The Chiefs went into the game against last year's beaten Premiership semi-finalists off the back of defeats against London Welsh and Northampton.

But Baxter was happy his side kept their heads and did not let those defeats have an impact on them.

"You have to give it your best and don't over react to wins or losses," said Baxter.

"There was no panic, no blame put to anybody. We said 'we can do this and this better, let's train at it and see if we can make it happen next week', and that's what we did.

"The boys' temperament was exceptional, they stuck to the game-plan fantastically well and backed it up with some fine individual performances.

"We could have lost the game if something had happened in those last two minutes, so that's how tight it is."