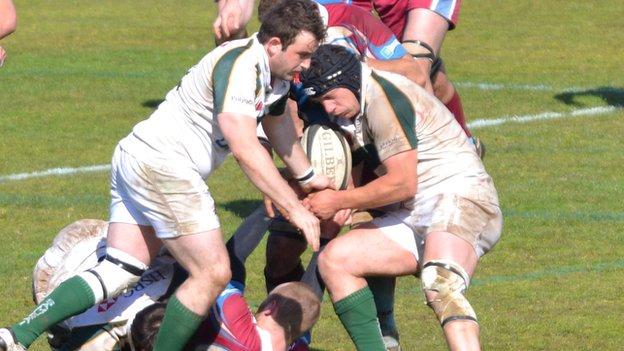 The island side have conceded 107 points in their first four games since being promoted to their highest level.

"Our defence is something that we try to pride ourselves on, definitely for the last two years we did," Reynolds told BBC Guernsey.

"I think this year once the skill level goes up and the players get better your defence tends to break down more."

He added: "We have to adapt to that and hopefully this weekend we can really show that we are hungry to keep on winning and that is our biggest aim at the moment."

Guernsey go into the Barnes match knowing they must improve their home form after losing 11-6 to Dorking earlier this month.

It was their first home loss since going down 16-15 to Trojans in their final match in London Two South West in April 2011.

"The vibe of being at Footes Lane is always better and this weekend we hope we can prove to the crowd that we really are a National Three standard team," Reynolds said.

"We want to rectify what we did last time and turn the mistakes into positives.

"We definitely have to try and find our form that we had last year and I think right now we're pushing it a bit too much, we've just got to slowly get through it."